"Sleeper" is the eighth episode of the seventh season of Buffy the Vampire Slayer and the 130th episode in the series. Written by David Fury and Jane Espenson and directed by Alan J. Levi, it originally broadcast on November 19, 2002 on the UPN network.

DON'T DECEIVE ME — Buffy discovers that Spike is feeding off humans again, and siring vampires. She and the gang attempt to find proof of Spike's actions as Spike begins to remember what may or may not have happened. Off in England, another young girl is murdered by the cloaked figures and Giles arrives too late to help her.[1]

Spike digs a grave for and buries a woman's body while he hums a English folk song "Early One Morning." In London, a man arrives in an apartment and calls for Nora, only to find her lying dead. When he approaches her body, a robed figure attacks the man with a dagger, but the man fights back. Another robed figure joins in and soon, the man is stabbed and falls dead next to the young woman. Willow arrives at the Summers' house and finds the house a disaster and Dawn still in shock. Dawn tries to tell her what happened and how she saw Joyce, but Willow explains that it was a big evil messing with their minds.

At Xander's apartment, Buffy and Xander talk about the possibility of Spike turning a human, even in spite of his chip. Buffy doesn't want to believe it because she knows the chip still works, but she and Xander have to wonder if maybe Spike's been acting all this time. Spike returns to Xander's apartment and receives a somewhat cold reception. In attempts to get a reaction from him about Holden Webster, Buffy mentions the encounter to Spike, but he reacts with complete calm and heads off to bed. Both having things to do, but not wanting to leave Spike alone, Xander gets a reluctant Anya to come over and stay with Spike. She doesn't like the idea of being stuck weaponless with Spike when he may be able to bite again. Xander tells her to call if Spike decides to go anywhere and then leaves for work.

Buffy returns to find the downstairs of the house trashed from Dawn's encounter with the unknown, hostile entity from the previous night and freaks out until she finds Willow putting Dawn to sleep. Willow informs her about the "evil" visits she and Dawn had and Buffy tells Willow about her encounter with Holden. Buffy wonders if they've been victim of lies and tricks, or if something else has been going on. Armed with a stake, Anya quietly searches Spike's room and clothes while he sleeps, but he awakes and catches her. She tries to lie about her intentions, claiming to want sex, but Spike doesn't really believe her and isn't interested in her offer. Later, after the sun sets, Spike leaves the apartment with an apology to Anya for any potentially hurt feelings. She quickly makes a phone call to Buffy about Spike's departure.

Spike walks the streets and passes by a man playing a harmonica, but as the vampire passes, the tune changes to Early One Morning. The sound seems to have a hypnotic effect on Spike and he begins to hum again. Buffy follows him, keeping out of sight. He finds a woman standing around outside and the two talk and flirt before going outside to an alleyway. Buffy tries to keep tabs on Spike, but she has a hard time following him through the crowd of people out walking the streets. Spike and the woman kiss against a wall and Spike pauses, looking up to see Buffy approach him and the woman. With a smile, she reminds him that she wants him to do it and he vamps and bites the woman, much to Buffy's pleasure.

Once the woman is dead, Spike realizes with great horror what he just did. He runs off in a blind panic as Buffy morphs into Spike form. Spike says, “How could you use a poor maiden so” a lyric from Early One Morning. Later, Buffy barges in on a sleeping Spike, angrily demanding to know whether he killed the woman she saw him with. He reminds her that can't kill anyone. She asks if it's because of the chip and he corrects her telling her that it's because of his soul and suspects that she's jealous. He doesn't deny talking to other women, but swears they mean nothing to him and reminds her of the seriousness of his efforts to prove his love to her. Though visibly taken aback and moved by his words and emotion, Buffy gets confrontational about Spike killing people and, although he doesn't remember everything, he's confident that he didn't kill anybody.

At Buffy's house, the girls do some research in attempts to find proof that Spike is or is not killing again. They discuss the possibility of Spike killing and Willow discovers that although there haven't been a lot of dead bodies found, there are ten missing people in Sunnydale, mostly young women. Though this proves that what Holden told Buffy is true, Buffy is still not positive that Spike is the culprit. As he gets ready to leave, Spike finds a pack of cigarettes in his pocket and gets flashes of killing the blond woman he met at the Bronze. He tries to leave the apartment, but Xander stands in the way. Spike knocks Xander out, setting off his chip for his efforts and then departs.

Spike arrives at the Bronze, where Aimee Mann is performing. Spike asks around after the young blond woman he was there with then moves upstairs to watch over the crowd. Meanwhile, Xander recovers from Spike's blow and calls Buffy to let her know what happened. A woman hits aggressively on an uninterested Spike, eventually reveals herself to be a vampire he'd sired a few nights before. The two break into a fight which Spike resolves by staking her and dropping her to turn to dust on the dance floor below, briefly distracting the band on stage and the surrounding crowd. Meanwhile, Buffy talks to the doorman at the club she'd followed Spike to the night before, learning that Spike has left there with a different girl every night. At the Bronze, Aimee Mann is heading backstage, telling a bandmate that she "hates playing vampire towns" as Spike phones Buffy cell to tell her he's remembering the bad things he's done recently and asks for her help. She agrees to meet with him at a set location. As Spike tries to leave, the morphing version of Spike shows up and chides the real Spike for deviating from the plan by calling Buffy, but that they can work around it.

Spike leads a hesitant Buffy into a dark basement and tries to show her what he remembers about his victims (several girls he's picked up, plus the owner of the house). Obviously suspicious, Buffy has come wielding a stake. The fake Spike is there as well, but Buffy can't see him. While the real Spike tries to show Buffy where he buried the bodies of those he killed, the fake Spike begins to sing the hypnotizing tune.

Spike vamps and attacks Buffy, cutting into her arm with a broken piece of glass. As the two battle it out, the bodies Spike's recent victims start to rise from the ground beneath them as newly-risen vampires. Buffy struggles with the fledglings while the real Spike gets a pep talk from his morphing version about tasting Buffy's blood. As two vampires hold Buffy still, Spike leans down into the cut on her arm, but he suddenly reawakens all of his memories of killing and he falls to the ground, horrified.

Buffy finishes off the rest of the vampires, including a late elderly vampire, then turns her attention back to Spike. Tearfully, Spike offers his heart for the staking. He's confused, scared, and hurting because of the lives he's taken. Buffy realizes that something has been messing with Spike's head like with Dawn and Willow and that he needs help. Back at her house, Buffy tells the gang about Spike and how she needs to keep Spike close if she intends to get answers they all need.

Meanwhile Giles charges into the room in London and finds the dead girl and the nearly dead man that was with her. The man, Robson, warns Giles that "it" has started and that "they" need to be gathered. From behind, a cloaked figure raises an axe and swings it at Giles's head.

Anya: "I... am here, obviously, because of the reason which I am about to tell you, with the following words, and that reason is... uh, clearly and obviously too, um... sex." 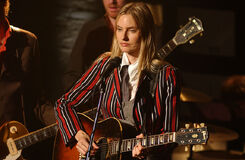 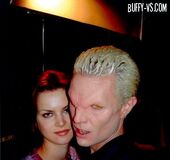 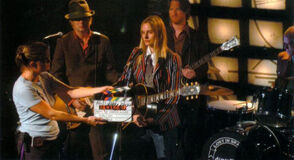 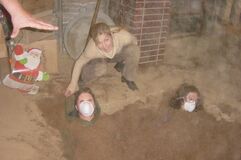 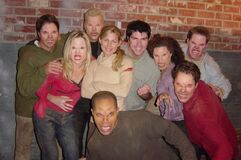