“A creature like you cannot be allowed to survive.”
―D'Hoffryn[src]

Unknown (last known Slaypire is dead, but more can be made)

All the combined powers of a Slayer and vampire, resulting in a creature stronger than both. 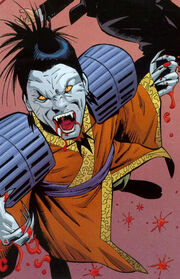 Slaypires went through the same psychological and physiological changes as regular humans did, retaining their memories but becoming undead and soulless. However, Buffy Summers did not undergo these changes when becoming a slaypire, probably so that she could suffer her nightmare-made-real, whereas Simone Doffler, having already been evil before her siring, remained much the same, though likely being far worse.

The transformation granted them physical abilities superior to conventional vampires and Slayers, but also the conventional weaknesses and limitations of a vampire. When Buffy was a slaypire, she fought off the Ugly Man with ease, despite being unable to take him before being sired. Moments after becoming a slaypire, Simone could easily overpower Buffy, a Slayer of greater power and experience.

Slayers retain their powers after death, as Buffy remained a Slayer despite having died twice - which explains why a Slayer turned vampire would be more deadly than any "normal" vampire, as in addition to their vampiric abilities, they retain their Slayer powers, which are typically more powerful than most vampires and demons.

Retrieved from "https://buffy.fandom.com/wiki/Slaypire?oldid=174983"
Community content is available under CC-BY-SA unless otherwise noted.