Slayer's Handbook is the third book of the Buffy the Vampire Slayer Roleplaying Game series. It was originally published in November 2002 by Eden Studios.

Just found out you're the Slayer, and feeling a bit overwhelmed?

Never fear, it's all right here in Technicolor goodness: the dos, the don'ts, the whys, the wherefores, even a few what's whats. There's also some notes from the Slayers' diaries, just in case you don't hail from Sunnydale.

Study up-it's your neck on the line (literally)!

Slayer's Handbook is a supplement for the Buffy the Vampire Slayer roleplaying game. In it, you will find: 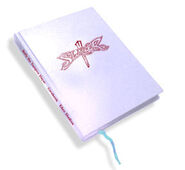 Cover logo
Add a photo to this gallery

Retrieved from "https://buffy.fandom.com/wiki/Slayer%27s_Handbook?oldid=213975"
Community content is available under CC-BY-SA unless otherwise noted.