First Slayer
Primitive
Primeval One
First of the Ones

“I have no speech. No name. I live in the action of death, the blood cry, the penetrating wound. I am destruction. Absolute... Alone.”
―Sineya[src]

Sineya[1] was a prehistoric girl and the first in the line of Slayers.[2]

In prehistoric Africa, a young girl named Sineya was taken against her will by three powerful mages — the Shadowmen — to become the ultimate weapon in the fight against the dark forces that plagued the world. They chained her to the floor of a cave and, using powerful magic, imbued her with the heart, soul, and spirit of a demon. Thus the First Slayer was created.[3]

Guided by her instincts and armed with her superhuman powers, Sineya hunted and killed vampires and demons. While the villagers she protected were grateful, they feared the Slayer for being part-demon, so they gave her a basket of supplies and asked her to leave.[4] Isolated, Sineya became a recluse, with either little or no contact with her own humanity or humanity at large.[2]

Though Sineya never had a Watcher,[2] at some point, she was given the mʔ weapon by the Guardians, and she used it to slay the last of the Old Ones that walked upon the Earth. Fatefully, that particular slaying took place on the Hellmouth in what would one day be the town of Sunnydale.[5]

After her death, Sineya's powers passed on to another girl. Thus the Slayer line was born.[4]

Thousands of years later, the Scooby Gang used an enjoining spell to invoke Sineya's spirit to defeat the near-invincible Adam.[1] She considered this an offense, as she firmly believed that the Slayer should and must operate alone.[2]

Using what appeared to be an apparition of Tara Maclay to speak for her, Sineya invaded the dreams of the Gang to punish them. While she was successful in attacking Rupert Giles, Willow Rosenberg, and Alexander Harris, Sineya was bested by the current Slayer of that era, Buffy Summers, who realized that it was but a mere dream, and she could stop the fight by waking up. Before she did, however, Buffy mocked her predecessor for her appearance and demeanor, and rejected Sineya's insistence that she worked alone.[2]

It was then that Sineya realized that she was defeated and vanished from the dreams, permitting the four of them to wake up, but not before leaving a cryptic message to Buffy, which foreshadowed the arrival of a sister, Dawn Summers, and her encounter with the banished god Glorificus.[2] As a result of this experience, Buffy became more accepting of her role as the Slayer and began to willingly study her power and history.[6]

When Buffy later sought advice in a Vision Quest, the Guide took Sineya's form to give Buffy two messages. First: encouraging her to love, telling her that her love would save the world. Second: telling Buffy the key to preventing the destruction of all creation: "Death is your gift."[7]

Wherein Buffy initially believed this was an allusion to her dark heritage,[7] she soon realized that the Guide was being quite literal; Buffy would need to sacrifice her life to save her sister and the world.[8]

In 2003, Giles took the Potential Slayers on a trip to the desert to meet the Guide in the form of the First Slayer, apparently to see if she could provide any information on the First Evil.[9]

Buffy encountered her for the third time in a dream a week later. This time, Sineya's message was: "It is not enough."[3] Buffy later learned that it meant her powers were not enough to fight the First Evil and that she had to get more power to win. This revelation ultimately led to Buffy sharing her Slayer powers with her army of Potential Slayers in the final battle against the Turok-Han vampires.[10]

The end of magic

A few months after the end of magic, Sineya used a fairy to communicate with Buffy, telling her that the Scythe was the key to reversing the damage caused by the destruction of the Seed of Wonder and restoring magic to the Earth, but this task was not for Buffy, but Willow.[11]

Sineya next appeared in a vision to the vampire hunter Billy Lane not long after magic returned to the world.[12] As Billy was male and therefore not a Slayer, the Watcher Giles interpreted this as a sign that the rules of magic had changed and that the First Slayer had accepted Billy as an ally.[13]

As the First Slayer, Sineya possessed superhuman strength, speed, durability, agility, stamina, reflexes, accelerated healing, and innate combat skills. However, due to her direct connection to the shadow demon, her superhuman powers were vastly superior to the other Vampire Slayers who came after her.[3] She also possessed the ability to astral-project into the dreams and visions of other Slayers, as well as the precognitive ability to foretell impending dangers.[2][3][11]

Translation:
We are heart.
We are mind.
We are spirit.
From the raging storm,
We bring the power of the Primeval One. 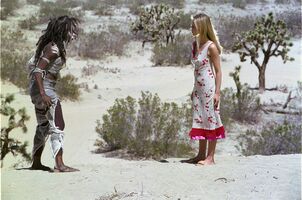 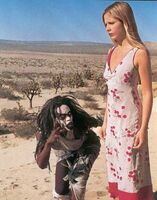 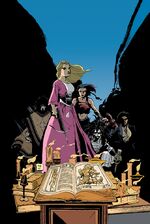 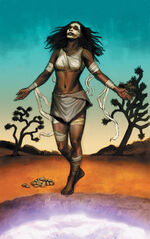