"Showtime" is the eleventh episode of the seventh season of the Buffy the Vampire Slayer and the 133rd episode in the series. Written by David Fury and directed by Michael Grossman, it was originally broadcast on January 7, 2003, on the UPN network.

HERE ENDETH THE LESSON — More potential slayers arrive in Sunnydale and Buffy's house is overrun with visitors. Meanwhile, the Ubervamp becomes more of a worry for Buffy as he is still guarding the caves where Spike is kept captive, and it becomes apparent the Ubervamp will be coming after the young slayer-wannabes at the bidding of the First Evil. Anya and Giles visit an oracle of sorts who they hope will provide them with information on the First and how to defeat it.[1]

A young woman gets off a bus at a bus station at night and heads to a payphone to find the number for Buffy Summers. Before she can find the number, one of the Bringers appears behind her with a knife. She backs away to escape the cloaked figure and others like him until she hits a wall, but before the Bringers can attack, Buffy arrives and rescues the young Potential. Once Buffy disposes of the Bringers, Buffy welcomes the frightened woman, Rona, to Sunnydale. At the Summers house, Willow struggles to sleep on the floor of her room while Kennedy talks constantly from her spot on the bed. Kennedy talks about the luxurious life she had when she was younger, prompts Willow to do some magic and repeatedly attempts to get Willow to join her on the bed, making Willow uncomfortable.

Downstairs, Molly tells several new Potentials about the recently killed Annabelle. Xander suggests they be quiet and sleep, but a still-bound and very bored Andrew suggests they speak louder. Buffy arrives with Rona and the gang is updated on the recent activities and findings. The gang lacks answers to most of their current problems like destroying the Turok-Han and rescuing Spike from the First Evil.

The Potentials are worried and lacking confidence. Giles suggests they seek answers from an oracle-like creature known as Beljoxa's Eye. Down in the cave where he's kept prisoner, Spike is approached by one of the Bringers, but for once, he fights back and breaks free of the bonds that hold him to a wall. He runs through the underground tunnels and finds Buffy waiting for him, but quickly is pulled away from his dream and into reality where the First Evil, looking like Buffy, is waiting for him. The First continues to taunt Spike, insisting that Buffy is not coming to save him, but Spike refuses to listen, quietly muttering to himself that Buffy will save him.

Giles and Anya go together to meet with a demon, named Torg, about Beljoxa's Eye. After some careful persuasion, Torg opens up a dimensional portal for the humans to pass through. On the other side, they find themselves in a dark, windy dimension and soon come face-to-face with a caged mass of eyes, the Beljoxa's Eye.

Willow gets a call from a member of the Coven in England. The decision is taken to free Andrew from his bonds, however Buffy warns him that if he tries to run or act against them he'll pay for it. Andrew promises he'll behave himself as Willow informs Buffy that another Potential arrived in town two days earlier and Buffy rushes off with Xander to pick the girl up before the Bringers do. As they leave, Dawn questions the usefulness of these girls. The Potentials work out in the basement of Buffy's house and thanks to some depressing comments from Eve, they talk about the seemingly insurmountable challenge they are facing and being called as a Slayer.

Buffy and Xander knock at the room where the latest Potential is staying. When no one answers, Buffy kicks the door in and they find a dead blond girl lying on the ground. Upon closer inspection, they find that the girl is Eve and she's been dead for days. Back at the house, Andrew talks to Dawn about his usefulness and continues to ramble, even after Dawn informs him that Buffy gave her permission to kill him. Buffy and Xander return to the house and proceed towards the basement where they tell "Eve" to get away from the others. The First in Eve's form finally reveals itself and with some thanks for the information learned over the past couple of nights declares it'll send the Turok-Han after sundown, then disappears. In the other dimension, Giles and Anya speak with the Beljoxa's Eye, which tells them that the First Evil cannot be destroyed and that it exists now because of a disruption in the Slayer's line, which was in fact, caused by the Slayer.

The gang, all worried after the frightening invasion by the First, talk about what they are going to do. Buffy tries to keep the Potentials calm, but they continue to worry about whether they are prepared to handle anything that lies before them. Buffy and Willow exchange glances and then both leave the dining room, followed by a confused Xander while the others continue to panic.

Back in the cave, the First approaches the Turok-Han as Eve and sends him out to kill everyone except "her." A crowd of Bringers forms outside Buffy's house that night, but do nothing but keep the Slayers from leaving. Buffy disperses weapons to the gang as they all wait for the expected attack of the Turok-Han. Willow practices some simple magic to see if the First would go after her again. Kennedy interrupts and is intrigued by Willow's skills and her past struggles with it. Willow warns her that the evil magic she's been exposed to in the past is not something Kennedy wants to see.

The Turok-Han charges at the house and breaks the front door down. Willow puts up a barrier that keeps it at bay, but it's almost too much for Willow and Buffy instructs everyone to run out the back. The gang encounters Bringers in the backyard, but they are destroyed and the gang runs off as the Turok-Han finally breaks through Willow's magical barrier. The gang runs down the street together and then Buffy tells them to break up. Willow and Xander lead the Potentials, Dawn, and Andrew to a safe location while Buffy turns and attacks the Turok-Han. After a brief struggle, Buffy runs and tries to get it to follow her.

Meanwhile, Giles and Anya return from the Beljoxa's Eye's dimension, where it is revealed that the glitch in the Slayer line was due to Buffy's second revival the previous year. Anya laments that she, Xander, Willow, and Tara are effectively responsible for what the First has done and still doing, and remarks that they would have most likely been better off if Buffy had just stayed dead.

Xander leads the way through a construction site, which the Potentials find to be an extremely exposed and unsafe location in which to hide. The Turok-Han appears, proving that it decided to go after the easier Potentials instead of Buffy. Kennedy prepares to attack it, but then bright lights flood site and Buffy appears as the Potentials move back to watch from a distance. Buffy tells the ubervamp that he's going to help her set an example for the other girls and begins a fight. A vicious battle ensues, but the Turok-Han again proves to be stronger. As Dawn watches, she realizes aloud that Willow and Buffy planned everything as a teaching tool. A quick flashback to the panic-filled discussion at the house earlier shows that at the moment that Buffy, Willow, and Xander left the others, it's revealed that the three were communicating telepathically about a plan to destroy the Turok-Han and boost morale of the others at the same time.

The Potentials begin to worry as Buffy ends up on the losing end of the fight, but Willow tells them to just wait. Just in time, Buffy turns things around and strikes the Turok-Han with a few harmful blows. Buffy finally grabs a wire to wrap around its neck and pulls until she decapitates the creature, slowly turning it to dust. The Turok-Han dusted, the bruised and blood splattered Buffy ends her lesson and leads the newly confident Potentials back home. In the cave, Spike tries to tell off the First in Buffy's form as she stands before him with a Bringers' knife in hand. Buffy cuts away his bonds and Spike wraps his arm around her, realizing it's the real Buffy, and she helps him out of the cave.

The First/Eve: "And Chloe, honey... you don't have to worry about getting called to be the Slayer before you're ready. You'll be dead before that happens. All o' you." 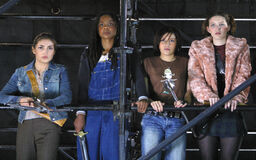 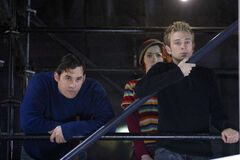 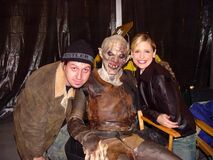 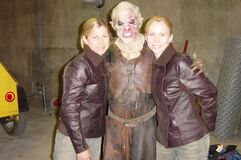 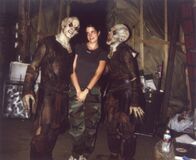