"School Hard" is the third episode of the second season of Buffy the Vampire Slayer and the fifteenth episode in the series. Written by Joss Whedon with David Greenwalt, and directed by John T. Kretchmer, it was originally broadcast on September 29, 1997 on The WB network.

PARENTS IN THE NIGHT — When parent-teacher night is interrupted by uninvited guests, Buffy must protect her fellow students, the principal and her mother while keeping her secret. Meanwhile, Angel's old friends, Spike and Drusilla visit Sunnydale for The Night of Saint Vigeous — the holy night of attack.[1]

Buffy has found herself and Sheila Martini in Principal Snyder's office. He has decided that the two girls will prepare the school lounge for parent-teacher night on Thursday telling them that whoever does the better job will not be expelled. He also notes that doing a good job may affect what he tells their parents towards the positive. Sheila's continued unconcern puts even more pressure on Buffy, who already has a tough time balancing slaying with a social life. Joyce warns Buffy later that if she gets a bad report then she won't be allowed to spend time with her friends.

That night, a new vampire by the name of Spike arrives in Sunnydale, knocking down the city's welcome sign. In the abandoned factory that is now their lair, the Anointed One has called together the few remaining members of the Order of Aurelius. With the Master dead and all hope of resurrecting him gone, they are now discussing who will serve alongside the Anointed One. As the following Saturday is the Night of Saint Vigeous when a vampire's power is at its peak, it is agreed that whoever kills the Slayer will take the Master's place. As one vampire boasts of his prowess, Spike saunters in and puts him in his place. Spike then offers to kill Buffy for the Anointed One, revealing that he's already killed two Slayers. Suddenly Drusilla, Spike's paramour who has psychic abilities and is more than a little insane, arrives and begins to babble about what Buffy is doing and begs Spike to kill her. The Anointed One agrees to let Spike try.

While the Scoobies are busy preparing for Parents' Night, Giles and Jenny show up to inform Buffy that Saturday will be the Night of Saint Vigeous, named after the leader of a vampire crusade, and that during that night the natural abilities of vampires will be enhanced. Buffy is unimpressed. Buffy tries to combine school and social life by studying French at the Bronze. Spike is there, too, and sends one of the Anointed One's minions to attack someone, then prompts Buffy to fight and slay the vampire while Spike watches. Spike then steps out of the shadows and tells her that he will kill her on Saturday. He later bumps into Sheila, who is enthralled by his bad boy charm.

Giles does not recognize Spike from Buffy's description. Angel walks in on the meeting and tells them that Spike is a large problem, and then leaves. Later, Giles finds a reference to Spike as William the Bloody, and discovers that he has indeed killed two Slayers already and that the "Spike" moniker came from his custom of torturing his victims with railroad spikes. Spike and Drusilla settle into their new home, with Drusilla unpacking her collection of dolls. It soon emerges that Drusilla is ill following an altercation with an angry mob in Prague. Spike is hopeful that being so close to the Hellmouth will heal her and encourages her to eat something, indicating the bound Sheila. Drusilla warns Spike that the Anointed One and his followers don't trust him, then sends him up to the surface to feed as she feasts on Sheila.

On Thursday night, the Scoobies are making weapons in the library while Buffy is preparing the buffet. Despite Buffy's best efforts to keep her mother, Joyce, from meeting any teachers or Principal Snyder, Joyce eventually meets the principal, and then she sternly orders Buffy home just as Spike and the other vampires crash through the window, too impatient to wait for Saturday. In the ensuing fight, Buffy leads the adults to safety in the science room while Xander, Giles, and Ms. Calendar barricade themselves in the library. Willow and Cordelia hide in a utility closet. Xander is sent out to get Angel. Buffy takes command of the incredulous adults, telling them to stay put as she climbs through the air ducts to reach the library and her weapons.

Xander returns to the school with Angel, who pretends to be his former evil self. Though Spike first welcomes Angel as a long-lost friend, he sees through the ruse and Xander and Angel are forced to flee. Xander hears Spike say that Angel was his sire. Buffy and Spike finally meet in the hall, and Buffy is almost bested when her mother shows up and hits Spike over the head with the flat of a fire axe. With the curse "Women!", he retreats. Joyce tells Buffy that she doesn't care about what Snyder said and is proud to have a daughter who knows how to take care of herself and others in a crisis. Snyder tells the police chief to say that the trouble was caused by a gang on PCP. When the chief wonders if people will believe it, Snyder asks if he'd rather tell the truth. Meanwhile, not knowing the vampires are long gone, Willow and Cordelia are still hiding out in the utility closet where Cordelia prays to God to be rescued, while Willow is desperate to be rescued from her company.

Spike returns to the factory and meets with Drusilla, telling her that he's never encountered a Slayer with friends or family but still promises to kill her soon. He then approaches the Anointed One who demands penance for attacking too early. After starting to go through the motions, Spike decides that he won't reduce himself to groveling for forgiveness from a kid and instead throws the boy in a cage and pulls it into the sun, killing him. From now on, he says, there will be less ritual and more fun in Sunnydale.

Spike: "Would it kill ya, a little mouthwash every couple hundred years?"

Xander: "The important thing in punch is the ratio of vodka to schnapps.... That was obviously far too sophisticated a joke for this crowd."

Buffy: "I don't suppose this is something about happy squirrels?"
Giles: "Vampires."
Buffy: "That was my next guess." 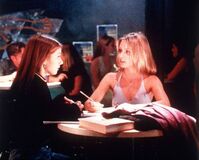 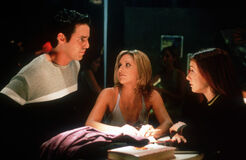 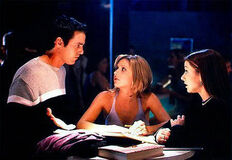 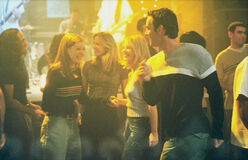 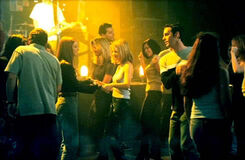 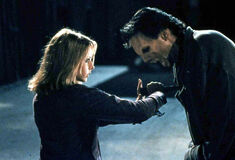 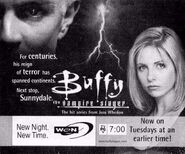 "For centuries, his reign of terror has spanned continents. Next stop, Sunnydale."