The Long Way Home, Part One

In Pieces on the Ground, Part One

“You're hot, you have great taste, you're a hell of a Slayer, and you smell good.”
―Buffy Summers[src]

Satsu was one of the Slayers activated by Willow Rosenberg in 2003. She was recruited into the Slayer Organization, where she trained under Buffy Summers. Satsu formed a friendship and later a sexual relationship with her mentor, before eventually becoming the leader of her own Slayer squad in Tokyo. After the Organization's disbanding, Satsu eventually became involved with someone, and started working for the United States Armed Forces.

“It's a furisode! Girls wear them when they come of age to show they're single and available for marriage. My parents bought it for me before I destroyed them with my gayness.”
―Satsu (while possessed by The Swell)[src]

Satsu was born to traditional Japanese parents who wished to see their daughter marry and have children, only to be devastated when she came out as a lesbian.[2] Satsu was activated as a Slayer while in school and the rush of power knocked her off her feet.[3] Eventually, she was recruited into the Slayer Organization where she was placed in Buffy Summers' command center squad in Scotland.[4]

Satsu proved to be an exceptional and skillful warrior, quickly earning the respect of her mentor, and in turn, she began to have romantic feelings about the older Slayer. When Buffy was put in a mystical sleep by Amy Madison that only a kiss of true love could break, it was Satsu who secretly awakened her, proving that her feelings were far more than just a crush.[5][3] Shortly afterward, Buffy chose Satsu to come with her to rescue her friend Willow Rosenberg from Amy, battling their way through a U.S. military base with ease. The fact that Satsu was chosen for the mission out of all the Slayers prompted some friendly envy from her peers Leah and Rowena, who told her not to embarrass them.[6] Satsu was also amongst the troop of Slayers who traveled underground to take down Yamanh of Hoht.[7]

“You said I’m your best fighter… You know I'm your best fighter… So you're either leaving me behind to avoid me or protect me. […] I don't know if I should be hurt or touched, but either way… I'm not following your orders. Not this time. I'll see you on the battlefield. Ma'am.”
―Satsu asserts herself to Buffy.[src]

Some time after their mission to rescue Willow, Buffy once again chose Satsu to help her clean out a nest of vampires. Buffy admitted that she knew it was Satsu who kissed her, partially from recognizing the taste of her cinnamon lip gloss. She explained that she was deeply flattered to know she felt that way, but couldn't reciprocate. Buffy also warned that people who love her have a history of getting hurt, a prediction that quickly proved true when Satsu was suddenly knocked out by Twilight. When she regained consciousness, Buffy comforted her in hospital.[3]

The two Slayers ended up having sex, only to be discovered by Buffy's shocked friends, who each walked in on them in bed together.[8] When Satsu commented on Buffy's plan to take all of the Slayers located in Scotland to retrieve the stolen Scythe, Buffy told her to follow orders, leaving Satsu hurt. This prompted Willow to have a heart to heart with the Slayer, in which she explained that Buffy was different from them due to her responsibilities as leader.[9]

In Japan, Buffy tried to order Satsu to stay behind and offer help to the local Slayers, who had just lost their leader Aiko to a brutal vampire attack. Satsu refused and insisted on taking part in the fight. She participated with Buffy's group during the attack on the vampire's headquarters, taking back the stolen Scythe and plummeting off the side of the building, being caught by Willow moments before landing on the sidewalk. Satsu later commanded the rest of the Slayers into attacking the rest of the Japanese vampires, who had lost their mystical powers.[10]

Back at the Slayer Organization Tokyo headquarters, Buffy and Satsu talked about their night together, and Satsu's belief she needed to stay away from Buffy, taking the position of leader in the Japan. When Buffy asked if this was goodbye, Satsu offered to leave the goodbye until the next morning, leading them to spend another night together.[10]

“Buffy’s right. The world’s coming apart. It’s time to stop being who we were and get a new flavor.”
―Satsu decides to move on from Buffy.[src]

Satsu proved competent in her leadership role. Her squad successfully commandeered a Korean submarine which had been hijacked by vampires. She neglected to report this detail, instead letting her Slayers use the sub to their advantage. Eventually, Kennedy was assigned to evaluate Satsu's position, partially due to her vagueness in the Korean report. Kennedy meanwhile, had a personal agenda, wanting to advise Satsu after her relationship with Buffy. She explained that Satsu was "not the only fool to ever wrinkle the sheets with a straight girl", and advised her to move on from Buffy.

While investigating the Santorio Corporation, Satsu was possessed by a demonic Vampy Cat, which she later nicknamed Fluffy. Kennedy exorcised Fluffy from Satsu's body, and the Tokyo Slayer squad discovered that Santorio Corp were shipping their Vampy Cat inventory to Scotland to attack Buffy. Kennedy and Satsu intervened, and battled the collective Vampy Cats called "the Swell", who revealed their affiliation with Twilight. The Swell was defeated by a missile launched by the Slayers' submarine, and an impressed Kennedy informed Satsu that she would receive a positive evaluation. Afterward, Buffy told Satsu that, in light of vampire Harmony Kendall's reality show making Slayers unpopular with the public, the Slayer army would have to change who they were. Satsu agreed, and disposed of the cinnamon lip gloss she had kissed Buffy with.[2]

After the Organization's disbanding, Satsu eventually became involved with someone, and started working for the United States Armed Forces. During world wide attacks by demon lords using the Restless Door to unleash demons on Earth, she was responsible for summoning Buffy to help the army, giving her the mission to represent humans in the VampCon and in reuniting classic and new vampires in a same cause. Although Buffy was resistant to collaborating with the army, who was once the Slayer Organization enemy, Satsu was able to convince her and lead her into a successful mission.[11]

“You’re my best fighter, Satsu. You could lead the crew some day.”
―Buffy[src]

Satsu had the common powers of a Slayer, such as superhuman strength, reflexes, agility, accelerated healing, and prophetic dreams. Her weapon of choice seemed to be a katana. In terms of combat skills, however, she might be far superior to other Slayers, as Buffy herself had frequently commented how impressive her fighting skills were.

Satsu: “Don’t make fun of me. This isn’t some crush…”
Buffy: “Your kiss couldn’t have woken me up if it was.”
— Buffy acknowledges the depth of Satsu’s feelings.[src] 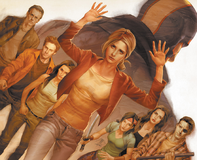 Retrieved from "https://buffy.fandom.com/wiki/Satsu?oldid=220443"
Community content is available under CC-BY-SA unless otherwise noted.