SARAH MICHELLE GELLAR GUEST-STARS — Buffy comes to Los Angeles seeking vengeance under the guise of protecting Angel from Faith's violent nature, but Buffy is shocked and hurt to discover her former love siding with her nemesis. Meanwhile, Wesley is faced with a crisis of loyalties when the Watcher's Council offers a chance at reinstatement if he gives up Faith.

Angel takes Faith to his apartment, tucking her into bed. As Angel retreats, Faith has a brief, violent vision where she charges at him with a knife and cuts up his face. When Angel comes up to get Faith food, Wesley argues about giving Faith another chance, and Cordelia gets Angel to sign several checks to fund her vacation, so she can be gone for as long as Faith is around.

After Faith starts reliving her past crimes, she attempts to leave Angel's. However, he extends another invitation to help her and she returns. Downstairs, Faith confesses to Angel that she is haunted by visions of her violent past in Sunnydale and inadvertently reveals that Buffy is dating someone else. Angel talks to Faith about redemption, saying she has to make amends for her crimes, no matter how hard it is. Meanwhile, Wesley plays darts at a bar, and encounters Weatherby, a member of the Watchers Council Special Operations Team, on the hunt for Faith. The council members give Wesley an opportunity to come back to the Watchers Council if he's willing to turn in Faith. They give him a syringe that, if injected, will sedate Faith and let them take her back to England. Wesley agrees to the plan on the condition that Angel remains unharmed, and Weatherby reluctantly agrees.

Lindsey McDonald, Lilah Morgan, and Lee Mercer, upset that Faith has teamed up with Angel, hire a demon to have her killed. In Angel's apartment, Angel comforts Faith after she hears a warrant for her arrest on the news. Suddenly, the demon sneaks into Angel's apartment and attacks. Faith kills it with a knife, and then is frightened by the sight of the demon's blood on her hands. Without warning, Buffy arrives at Angel's place and is shocked to find Angel hugging Faith.

Buffy is determined to turn Faith in to the police as revenge for all the trouble she recently caused in Sunnydale, and is eager to dole out some physical payback in particular for what Faith did to Riley, but Angel refuses to allow this. Buffy hits Angel and when he hits her back, both she and Angel are in utter shock and Buffy is offended that he would punch her for Faith. He immediately apologizes to her, but notes it was out of self defense since she hit him first. Wesley arrives with the news that the Council is looking for Faith, and Buffy confirms that they'll kill her if they get their hands on her. The two Slayers escape to the roof, where they argue about everything that has happened. Though Faith is genuinely sorry for what she has done and asks for another chance, Buffy is unwilling to forgive her for what happened. She claims that all Faith has ever done is screw up her life by targeting Angel and then Riley, bitterly stating that, while she's lost fights before, Faith is the only person who ever made her feel so helpless. Faith asks her what can she do to make up for it, until all of a sudden Collins attacks Buffy and Faith as Smith hovers above the roof in a helicopter. Inside the apartment, Wesley stabs Weatherby with the syringe while Angel runs upstairs and as the two Slayers seek cover against their attackers. Angel bursts through the roof skylight and gets inside the helicopter, throwing Smith out on the roof and ordering the pilot to take the helicopter down. As Angel takes off in the helicopter, Buffy notices Faith has vanished, believing she has once again escaped justice.

Detective Kate Lockley — guided by Lindsey's information — tracks down Angel and arrests him for harboring the fugitive Faith. When Angel and Kate, with Wesley and Buffy in tow, arrive at the police station, Kate threatens to put Angel in a cell with a view of the sunrise if he doesn't tell her where Faith is. Buffy demands Angel to tell them until they are surprised to see Faith is voluntarily confessing to her crimes. Later, Buffy is mad at Angel for not notifying her of Faith's presence in Los Angeles, but Angel explains that he didn't think it was her business and that he was getting a breakthrough with Faith. She admits to Angel how hard it was for her to see Faith with him. Angel counters by saying it was not about Buffy — it was about saving Faith's soul and that it's what he does, letting Buffy know she is not a part of that as well as reminding her of their last meet that it was her idea that they stay away from each other. Buffy claims that she had come because he was in danger, but Angel is not fooled and accuses her of only looking to get revenge on Faith. She does not deny his accusation, and Buffy lashes out by telling Angel she has someone else in her life. Unlike her relationship with Angel, she can actually trust her new boyfriend.

Infuriated and hurt, Angel launches a tirade against Buffy, reminding her that, while it's great that she has moved on, he himself cannot and has no one to share his pain when he is hurt from having to see her every time, finishing when he informs Buffy that she doesn't know him anymore and that she has no right to just show up with her "great new life" and tell him how to do things before harshly demanding that she go back to Sunnydale immediately. Buffy complies after a slight hesitation, complaining that "Faith wins again." As soon as she is gone, Angel regrets his harsh words and decides to head to Sunnydale to make his own amends. Wesley assures him that he thinks Angel was right in believing Faith could still be rehabilitated. Meanwhile, Faith manages to find peace in her jail cell. 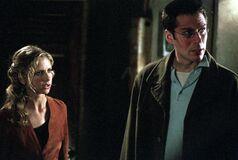 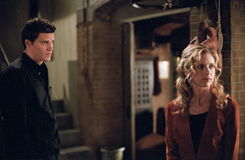 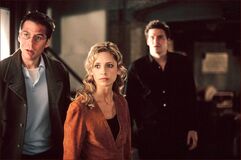 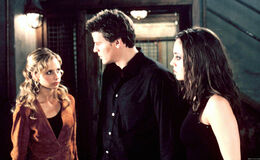 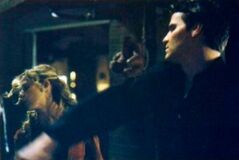 Retrieved from "https://buffy.fandom.com/wiki/Sanctuary?oldid=236288"
Community content is available under CC-BY-SA unless otherwise noted.