watch 02:03
Wiki Targeted (Entertainment)
Do you like this video?
Play Sound

Welcome Back to the Hellmouth, Part Two

Robin Wood is a Watcher and a Sunnydale High School student.

In 2019, after praising her running abilities, Robin asked new student Buffy Summers to sign his casket. He explained he had broken his arm falling off a roof, but it was a long story.[1]

Buffy's friend, Willow Rosenberg, eventually invited him to go to the movies with her group of friends, so he went as Buffy's date.[2] As they watched Tiger Woman: Wrath of the Beast, Robin attempted to hold her hand, but she pulled it away out of nervousness.[3]

When Buffy and Willow sought out the Siphon to ensoul the recently sired Alexander Harris, Robin noticed their absence at school and followed them into the woods using a locator app. The two lied to him explaining they were researching for a school project, and he observed the strange creatures in their path. Robin then helped them return to the apartment of Rupert Giles after Willow sacrificed half her soul and he left as soon as she coughed out the Anima Colligationem.[4]

Giles advised him to forget the things he saw that day, and Buffy ran after Robin to hug him, apologize for not being "normal", and thank him for his help. As Robin smiled after Buffy, he received a message from the Watchers Council asking: "Are you in?" — to which he agreed.[4]

During the Halloween party at Sunnydale High, Robin, dressed as a spider, avoided Buffy and danced with Sandy Noxon, a girl Angel noted looked a lot like the Slayer.[5] When the Hellmouth was activated, Robin met Buffy and Xander at the library and identified the demons that attacked them. He then escaped the burning school with Cordelia Chase, who had heard their conversation about the supernatural.[6]

Days later, Robin heard a sudden noise in his home, although his father didn't. As he returned to his bedroom, Kendra Young stood in front of him, asking if he wasn't a little short for a Watcher.[7] 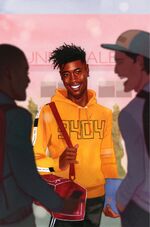 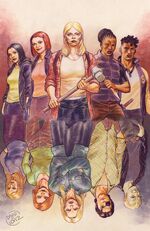 Retrieved from "https://buffy.fandom.com/wiki/Robin_Wood_(2019)?oldid=236770"
Community content is available under CC-BY-SA unless otherwise noted.