On Your Own, Part One
Finale (visions)

Robin M. Wood[3] was the principal of the rebuilt Sunnydale High School in 2002.[4] A freelance vampire hunter, he for a long time sought revenge on the death of his mother, the Slayer Nikki Wood,[5] killed by Spike in 1977.[6] Robin became an ally of the Scooby Gang in their fight against the First Evil and,[7] after surviving the battle at the Hellmouth,[8] leader of the Cleveland squad in the Slayer Organization.[9]

Robin was born to Nikki Wood, a Slayer active in New York City in the 1970s; his mother was actually pregnant with him during her Tento di Cruciamentum, prompting her Watcher to object to her being tested in such a condition.[10] Robin was the only child known to be born to one of the Chosen.[5] Though upon his birth, Nikki intended to retire from her life as a Slayer and lead a normal life with Robin, she couldn't dismiss her calling and returned to New York shortly after leaving, taking up the mission once again.[10]

In 1977, when Robin was four years old, his mother was murdered by the vampire Spike.[6] Afterward, Robin was taken in by Nikki's Watcher, Bernard Crowley, who raised him like he was his own. Eventually relocating to Beverly Hills, California, Robin was trained by Crowley in all forms of Slayer combat, becoming an independent vampire hunter, swearing to find the vampire that killed his mother and get his revenge.

Robin took up the post of principal of the newly rebuilt Sunnydale High School in 2002.[4] Knowing that the school was built above a Hellmouth, Robin set up stake in Sunnydale as a freelance vampire hunter.[5] Robin learned that Buffy Summers was the current Slayer and took an interest in her. Though she was inexperienced, he offered her a job as a guidance counselor at the school.[4] Buffy was suspicious of the mysterious principal, especially after learning that, in the rebuilt building, his office was directly above the Hellmouth. When Robin asked Buffy on a date, she wasn't sure what to make of it until he led her right into a vampire ambush. Presuming that he was evil, Buffy was shocked to discover his true origins.[5]

Robin joined Buffy's fight against the First Evil though he was initially put off by Buffy's alliance with a vampire — Spike. Robin was later visited by the First, appearing to him as his mother, who told him that the vampire was the one that killed her.[5]

As retribution for his mother's murder, Robin conspired with Watcher Rupert Giles to distract Buffy and kill Spike. Robin lured Spike into his garage where he played the old folk song that the First used as a trigger to enable a feral state in Spike so that he could kill the monster that took his mother away from him. However, the plan failed; Spike was freed from the First Evil's influence and turned the tables on Robin. While Spike spared Robin's life out of respect for Nikki, Buffy assured Robin that she would allow Spike to kill him if he tried anything again, having enough to deal with in the war with the First without having to deal with personal vendettas. Though initially shocked, Robin respected Buffy's wishes and ended his vendetta, subsequently firing her so that she could focus her energies on the mission, telling her that "the mission is what matters," something his mother often said to him as a child.[1]

When Slayer Faith Lehane arrived and everyone began questioning Buffy's leadership, he was one of the ones who voted that Faith take the leadership position.[11] After discussing with Faith their respective conversations with the First, the two became physically intimate.[12] Prior to the final battle, Robin expressed concern that Faith viewed men as mere sex objects, and pledged to surprise her. Though badly wounded in the final battle, Robin surprised Faith by surviving.[8]

After thousands of Potential Slayers around the world were activated as full-fledged Slayers, Robin became the Watcher of a squad of the Slayer Organization at the Hellmouth in Cleveland. Faith referred to him as "the ex," indicating that the couple had ended their relationship.[9]

After the destruction of the Seed of Wonder and the end of magic, Robin gave advice to the seemingly pregnant Buffy about how he handled his mother being a Slayer. He insisted that she could raise the baby because she managed to hold down a normal life while all other Slayers did not or could not, though Buffy still remained unsure. Nonetheless, Buffy promised Robin that, if she did keep the baby, she would not raise it alone.[10] However, it was eventually discovered that Buffy was actually in a robotic body, and the apparent pregnancy was actually the result of improper programming, design and maintenance.[13]

Robin had an easy going attitude and confidence. Those traits were in sharp contrast compared to his predecessors, the nervous Principal Robert Flutie and strict disciplinarian Principal Snyder. Buffy described him as "solid" and "funny." She also said he had that "too charming to be real kinda thing" going for him.[5]

Robin held onto his anger for the vampire that killed his mother throughout his lifetime which led to him elaborately planning to kill said vampire, Spike, upon meeting him. However, he was able to push his vendetta to the side when he was defeated by a re-ensouled Spike[1] and understood Buffy's willingness to let Spike kill him if he ever tried anything again because the "mission is what matters."[14]

Robin also had what he claimed, the ability to read people very well. He was able to see Faith's rivalry with and feelings toward Buffy upon first meeting her as well as the reason Faith blew him off after their intimate night together.[12]

Despite not inhering any of his mother's Slayer abilities, Robin was a skilled and experienced vampire hunter.[5] 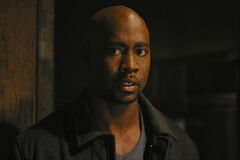 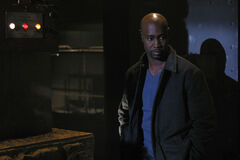 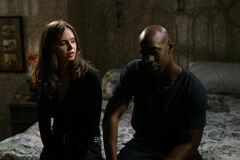