“I went to London, fell in with the worst crowd that would have me. We practiced magicks. Small stuff, for pleasure or gain.”
―Rupert Giles[src]

Ripper's crowd was a group of young warlocks in 1970s London. It included Rupert "Ripper" Giles, Ethan Rayne, Thomas Sutcliffe, Philip Henry, Randall, and Diedre Page. The group was involved with the demon Eyghon the Sleepwalker.

“Yes, of course. 'Here's the key to power, now don't use it.' That's what all the books say, don't they? We're breaking down the old barriers. Making the occult serve us, not the other way around. I've done it myself. We all have actually being possessed... By a being who was old when the world was young... It's the most incredible high.”
―Ethan Rayne[src]

After Ripper dropped out the Watcher's Academy, he met Ethan and was introduced to the rest of the crew in Soho, London. Experimenting with magic and the occult, the group tattooed themselves with Eyghon's mark and summoned him. Their intention was to take turns sleeping while the rest would invoke the demon to possess the sleeping participant, resulting in a extraordinary high for the one possessed.[1]

The possession, though, resulted first in the death of Randall, despite Ripper and Ethan's attempt to exorcise him. The demon promised to dominate them and the Earth, remembering that they had his mark and he owned their bodies and souls.[1] Ripper was changed by the event and abandoned the group, later returning to the Watchers Council and becoming Buffy Summers's watcher.[2] Ethan, on the other hand, delved deeper into the black arts. When Ethan asked, years later, when things had changed and they stopped being mates, Giles replied: "When you started to worship chaos."[3]

By late 1997, Eyghon had already killed Thomas, and then Diedre, whose corpse he took possession of in order to hunt down Philip. Eyghon chased Philip all the way to Sunnydale High School, where Philip had gone in order to find Giles, about twenty years after their last encounter. However, Eyghon killed Philip before the latter could reach Giles, and took possession of Philip's body at the morgue. The demon attempted to kill both Giles and Ethan, only to be temporally repealed.[4]

Ethan and Giles encountered again several times. In Sunnydale, Ethan would bring chaos to the city using his magic knowledge. Giles, with the Slayer and the Scooby Gang, would try to stop him and save the lives endangered.[5][6][3]

Years later, Ethan Rayne was imprisoned and killed by the military segment of the Twilight Group.[7] Giles died by the hands of the vampire Angel possessed by Twilight.[8] They both had their corpses possessed by Eyghon, only to be stopped by Angel.[2] Some time later, Rupert Giles was resurrected, but in his twelve years old self's appearance,[9] again remaining the last surviving member of the group. 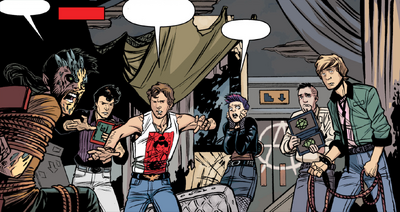