"Revelations" is the seventh episode of the third season of Buffy the Vampire Slayer, and the forty-first episode in the series. It was written by Douglas Petrie and directed by James A. Contner. It was originally broadcast on November 17, 1998 on The WB network.

That night, in the Sunnydale High School library, Post tells the Slayers and Giles that she was sent down to take over as Faith's Watcher and report back on the entire situation in Sunnydale. Faith initially balks at the idea, however Giles tells her they should cooperate if the Watchers Council feels she needs observation. Mrs. Post then states she is also supposed to report on Giles, as there is worry he has become "too American." She takes the time to not-so-subtly insult him at every turn. She tells them about a demon, Lagos, that has come in search of the Glove of Myhnegon and that she wants both Slayers at full strength to kill it.

Walking on the streets, Buffy and Faith talk about guys and Faith tries to get info about Buffy's relationship with Angel, but Buffy is still too confused about it all and doesn't want to talk. Faith offers to take a final sweep through one of the cemeteries while Buffy claims to go home, tired. Faith runs into the demon, who is frantically searching for the glove, and she gets beaten up pretty badly, but the demon leaves and doesn't finish her off because he's too preoccupied. While looking through the cemetery, Xander sees Angel coming out of the crypt. Xander follows him to the Crawford Street mansion, and finds Buffy and Angel in a passionate kiss, but Buffy then breaks it off because it is taboo. Angel shows her that he has the glove that Lagos wants.

He calls 911 as Faith jumps to the conclusion that Angel did it, though Xander doesn't think it was Angel, as "it's not his style." He wants her to stay and help with Giles and tells her that Giles might die without their help, but she leaves in order to go kill Angel. At the mansion, Angel has performed the spell for the living flame needed to destroy the glove, and at that point Post arrives, claiming to be a friend of Giles' wanting to help with the spell. Angel goes to get the glove, and she hits him over the head with a shovel.

After school, Buffy goes to visit Faith at her motel room who isn't very receptive after everything that's happened. Buffy explains that Mrs. Post fooled everyone, and that Faith can trust her in future. Faith however isn't interested, telling her that the only person she trusts now is herself. Buffy exits the room, and Faith is left alone. 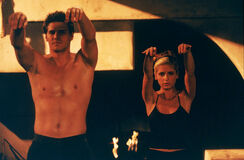 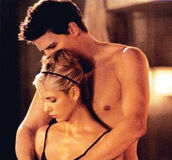 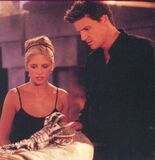 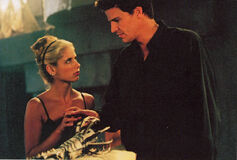 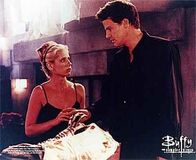 "Tonight, Sunnydadle discovers Angel is back for good... or for evil."