When Buffy came back from the dead earlier this season, she received a call from Angel, asking for a secret rendezvous. When she came back to Sunnydale the next episode, she didn't tell anyone what happened while she was away. Now Jane Espenson, the TV scribe behind both those episodes, gives us a glimpse into that secret night... Featuring a reunion of Buffy artists dating from the very beginning of our series.

This special one-shot, featuring extra story pages, brings back Randy Green, Chynna Clugston-Major, Ryan Sook, and many more. Fronted by Jeff Matsuda, who's drawn more Buffy covers than any other artist, this is a must for followers of the show.[1] 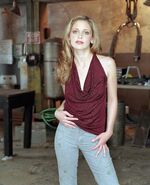