"Reptile Boy" is the fifth episode of the second season of Buffy the Vampire Slayer television show, and the seventeenth episode in the series. It was written by David Greenwalt and Joss Whedon, and directed by David Greenwalt. It was originally broadcast on October 13, 1997 on The WB network.

BEAUTY AND THE BEAST — Buffy and Cordelia become unlikely party pals when at a fraternity bash they are offered as human sacrifices to Machida, a horrible half-man, half-snake creature.[1]

Buffy, Xander, and Willow are hanging out at Buffy's house watching a Hindi movie. Xander points out, despite having no money or place to go, they are still having fun. Willow gives them an option to go out, but Buffy says she's happy to stay home and be a regular girl. She says that there have been no demons or vampires to slay and she's happy with the apparent lack of activity at the Hellmouth.

Meanwhile, a girl jumps out of a second-floor window of a frat house. She is chased into a cemetery by three guys wearing ceremonial robes. Before she can get any further, another guy in a ceremonial robe steps in front her. He admonishes the girl and asks where she's going, telling her the party is just getting started.

The next day at school, Cordelia is talking to one of her friends about laughing uproariously at anything that a guy might say and to always maintain eye contact. Buffy and Willow discuss Buffy's dreams about Angel and how frustrated they are making her. Willow points out that she thinks that Buffy and Angel are perfect for each other, other than the fact that Angel is a vampire. She tells Buffy to ask him out for coffee, that way they can spend time together without too much of a commitment. Cordelia then brags to Xander that she is dating a college guy. She points out that she is more sophisticated because she is now dating a Delta Zeta Kappa fraternity boy.

Giles presses Buffy to train harder, but she just wants to be a teenager. Later that afternoon, Richard Anderson comes by the school to see Cordelia, and his friend Tom Warner becomes interested in Buffy. Cordelia introduces Buffy to them, and Tom invites her to the party, but she turns him down claiming she is involved with someone. Giles calls Buffy and she leaves.

At night, during patrol, Buffy encounters Angel. He smells blood on a bracelet Buffy finds on the ground. When Buffy asks Angel about getting coffee, Angel tells Buffy that their age difference is a problem and that she does not know what she wants in life. She runs off. At school, Buffy agrees to go to the frat party with Cordelia.

Later that night, Giles and Willow discover that the bracelet is from Kent Preparatory School, just outside of Sunnydale. Several girls have gone missing over the past few years, which is located near where Buffy is partying. Angel appears at the library and asks about Buffy. Willow then reveals to them that Buffy is at a party. They question Buffy's reason for lying to them and Willow yells at them, reprimanding Giles for pushing her too hard and Angel for stringing Buffy along and not making time for her. They rush off to help Buffy and Cordelia.

At the party, Buffy notices the immature behavior by drunken frat guys. Xander has sneaked in to protect Buffy, but other party-goers recognize him for a crasher. They force him to put on some women's clothing and dance. Meanwhile, Buffy decides to accept a drink after Tom calls her "too mature." Buffy then stumbles her way up to a bedroom to lie down and is soon unconscious. Richard comes in and starts touching her, until Tom pulls him off, saying that the girls are not for him, but for the one they serve. Cordelia, meanwhile, is lying unconscious in the same room. When the girls wake up, they find themselves chained in a basement as an offering for a demon named Machida, along with Callie, the girl who tried to escape the frat house. Cordelia is chosen to be the first victim, but Buffy distracts the demon and breaks out of her chains just in time.

Willow, Angel, and Giles head to the frat party and meet up with Xander. They enter the house and beat up the frat guys. Willow realizes the girls are in the basement, and they enter as Tom and Buffy fight. Buffy get's the sword and cuts the demon in half, and the frat guys are arrested. Though Giles is still not entirely happy that Buffy lied to him, he realizes that he's been pushing Buffy too hard and promises to take it easy on her from now on.

Afterward, everyone gathers at the Bronze, where Cordelia has changed her standards and is now advocating dating younger men. Holding a newspaper, Xander reveals that the Delta Zeta Kappas have been sentenced to consecutive life sentences and that the bodies of past victims, dating back fifty years, have been found. Additionally, many corporations founded by former Delta Zetas have suffered because of the fraternity's inability to feed Machida. At that moment, Angel appears and asks if Buffy would like to get coffee with him sometime. She agrees and says she'll let him know.

Tom comes to near the alter. And, unbeknownst to any of our heroes, the snake body begins slowly moving. Until it joins up with the torso. A squooshy sound of flesh and protoplasm meeting and the two halves re-join!
Cordelia: "You’re going to jail for about fifteen thousand years. Oh god, it's over… it's really…"
That's when Machida, re-joined, suddenly pops up again. Angel takes a threatening step forward next to Buffy, growls. Machida towers over Tom.
Machida: "For a hundred years I have given your forbears wealth and power. And this is how you repay me. From this day forth you are alone in the world."
Machida slides back down. Cordelia is afraid to breathe. With good reason. Machida pops back up, grabs Tom.
Machida: "One for the road"
Machida disappears into the pit with Tom. We hear Tom's screams, a quick couple of chomps and then silence. 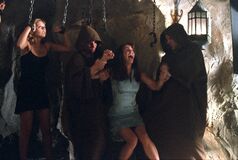 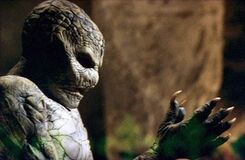 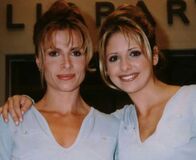 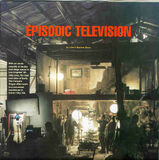