Ray gun was a firearms that fired bolts of energy as opposed to conventional bullets. This weapon was available in Haddyn in the 23rd century, varying in sizes, colors, and formats.

The Haddyn Police Force and Melaka Fray would notably carry their ray guns in a holster, and use them in non-lethal ways. Leveling the potency of an attack while firing,[1] the weapon was capable of blinding a target,[2] leave them unconscious,[1][3] or immobilized.[4]

Against the mystical Scythe, the rays would simply rebound on its blade.[5] 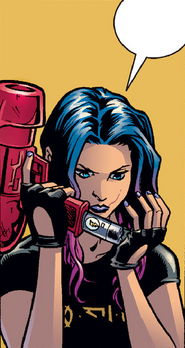 Amma shoots with her ray gun.

Faith receives her own ray gun.
Add a photo to this gallery

Retrieved from "https://buffy.fandom.com/wiki/Ray_gun?oldid=206723"
Community content is available under CC-BY-SA unless otherwise noted.