"Prophecy Girl" is the twelfth and final episode of the first season of Buffy the Vampire Slayer television show, and the twelfth episode in the series. Both written and directed by Joss Whedon, it was originally broadcast on June 2, 1997 on The WB network.

A HEART-STOPPING SEASON FINALE — Buffy wants to resign from her life of slaying when Giles uncovers an ancient prophesy that spells out her deadly fate, as the Master's ascension from the Hellmouth is at hand. As the earth begins to crack open, Xander, Willow and Cordelia face an army of demons and the prophetic end of the world. Meanwhile, Xander finally asks Buffy to the prom with equally disastrous consequences.[1]

Xander is practicing lines on Willow at the Bronze, preparing how best to ask Buffy to an upcoming dance. Cordelia is in a car making out with Kevin, as Buffy slays a vampire nearby. In the library, Giles is reading the Pergamum Codex that he recently acquired and comes to a passage concerning Buffy and what he reads leaves him shell-shocked. As he attempts to digest the information he's just learned, an earthquake is felt all over town, and the Master revels in it.

The next morning, Buffy is meeting Giles in the library, where no significant damage was sustained in the earthquake. Buffy explains that the vampires are rising in number and getting braver, but Giles is distracted by his thoughts. After biology class, Willow finds an excuse to leave, leaving Xander alone to ask Buffy to the prom. Buffy regretfully gives him the "let's just be friends" routine. Xander takes the rejection badly, and walks off to wallow in his misery.

Giles phones Angel and asks to meet with him as soon as possible when Miss Calendar arrives in the library, telling him that she sees apocalyptic portents and demands to know what is happening. She tells him Brother Luca, a monk in Cortona, is e-mailing her about the Anointed One. Giles asks her to get more information about this, promising he will explain everything later. In the school hall, Kevin and Willow promise to help Cordelia set everything up at the Bronze for the dance. Willow sees Xander wallowing in his misery and offers sympathy. When Xander asks her to the dance, she refuses to be his second choice, despite the fact that she is in love with him.

That evening, as Buffy enters the library, she hears Giles telling Angel what he's learned. Angel refuses to believe what Giles is telling him but Giles insists that he's verified the prophecy which tells, without a doubt, that the next evening Buffy will face the Master and die. Buffy is understandably devastated at the idea of her impending death, and rejects Giles and Angel's attempts to comfort her and in a fit of emotion throws the books across the library. She then tells the two that she has a way around the prophecy, by quitting as the Slayer. Even though the two warn her that without her to stop him the Master will rise and unleash hell on earth, she refuses to listen and leaves the cross Angel gave her on the table. She goes back home and tries to convince her mother that they go away for the weekend. Instead, Joyce tells her that the gallery is open on weekends, and then gives her a stunning white prom dress. After she tells her about when she met Buffy's father, Joyce encourages her to go to the dance.

The next day at school, Cordelia and Willow find the members of the audio visual club, including Kevin, slaughtered by vampires, as the TV plays a cartoon of the Three Little Pigs. Having heard the news, a sympathetic Buffy shows up at Willow's, all decked out in her prom dress. Willow is shell-shocked; even though she has faced vampires and death before, until this it has never been quite so personal. Buffy heads back to the library, where Giles has explained to Ms. Calendar that Buffy is the Slayer. Having used the information that was provided to him by Ms. Calendar, Giles discerns the Anointed One is still alive and is a child. He then tells Ms. Calendar that he intends to face the Master so Buffy doesn't have to but Buffy, having overheard everything, stops him having realized she can't escape destiny. Giles tries to stop her, telling her he's willing to defy the prophecy, so Buffy knocks him out. Ms. Calendar reminds Buffy that if she faces the Master she'll die, and Buffy responds that at the least she may be able to take him down with her. Outside of school, she finds the Anointed One asking for help. Buffy tells him she knows who is and allows him to lead her to the Master's lair.

Willow and Xander show up at the library, where they learn of the prophecy and that Buffy has gone off to face the Master. Xander leaves, only to show up at Angel's apartment. The two have a mutual dislike of each other, both being in love with Buffy, but when Xander tells Angel that Buffy is going to face the Master he agrees to lead him to the Master's lair. The Master and Buffy fight and taunt each other. The Master tells Buffy that it is her blood which will free him, drinks from her and leaves her to drown in a shallow pool before breaking free of his mystical prison and rising to the surface.

At the library, Willow and Ms. Calendar decide that the Hellmouth is underneath the Bronze, and leave. However, as they leave, they see an army of vampires approaching the library. Cordelia rescues them in her car, and drives the car straight into the school. Xander and Angel reach Buffy only to find that she is dead. Xander performs CPR (as Angel couldn't do it himself, since vampires don't breathe) and manages to revive her. When Buffy regains consciousness, she heads to the surface to kill the Master who is now above the library and using her power to summon all matter of beasts from the Hellmouth. Cordelia, Willow, Giles and Jenny fight off vampires trying to enter the library, and just as Giles realizes that the Hellmouth is directly underneath the library, a tentacled creature rises through the floor. Buffy throws the Master into the library, where he is impaled on a jutting piece of wood and his soft tissues disintegrate, leaving only his skeleton and the Hellmouth closes, sucking the tentacled creature back down.

The gang regroup and reflect on everything that happened, including Buffy's temporary death. The Hellmouth is closed and the vampires have gone, the world is saved. Giles notes that he should have known Buffy wouldn't have let death stop her. The stunned friends stare at each other wondering what to do now, and Giles suggests that they leave as he doesn't like the library that much anymore. The group decide to head to the dance, with Buffy stating "We saved the world. I say we party." Miss Calendar asks about what they should do with the Master's skeleton, and Buffy tells her not to worry... he's not going anywhere, before calling him a loser. The gang then leave for the Bronze, leaving the skeleton behind.

Xander bails, wandering off under the archway. Buffy sits by herself on the bench, bummed. Which is when the hail of pebbles starts. The first few get Buffy's attention, tiny hard pellets hitting the ground around her. She stands as more start coming down. People — including Buffy — all run for cover as the real shower starts. Buffy stands under the archway, watching the hail come down. Angle: Xander. Walking away, not near Buffy. He hears:
Student: "Check it out! It's raining stones!"
Xander looks back over his shoulder.
Xander: "Figures." 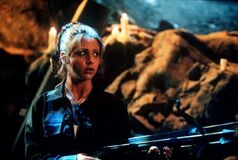 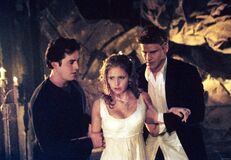 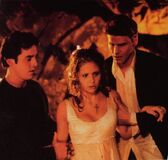 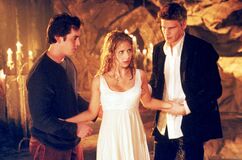 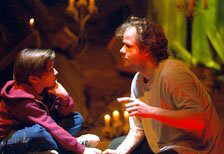 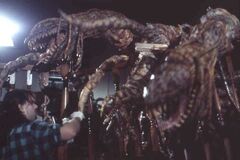 "Tonight: The earth opens. Fire rains down. And her fate awaits."