"Phases" is the fifteenth episode of the second season of the television show Buffy the Vampire Slayer, and the twenty-seventh in the series. It was written by Rob Des Hotel and Dean Batali, and directed by Bruce Seth Green. It was originally broadcast on January 27, 1998.

There's a werewolf at large in Sunnydale. Buffy tries to protect Sunnydale residents from the beast's savagery, and protect the savage beast from a bounty hunter who doesn't care that his target is human 28 days out of 31. Meanwhile, Angelus stirs up more trouble for Buffy.

Willow is increasingly frustrated that Oz shows no sign of wanting to get serious — not to mention physical — with her. Cordelia is frustrated with Xander because he keeps talking about Willow, even while making out in Sunnydale's Lovers' Lane under a full moon. They are attacked by a werewolf that rips a hole in the car's roof. Giles points out that there have been quite a number of other attacks, though so far only animals have been killed. During high school gym class, we learn that at least two students have been recently bitten: Oz by a young cousin who doesn't like to be tickled, and school macho Larry by a dog.

After some research, Giles finds out that a werewolf is a wolf for three nights — the coming night, the full moon, would be the second. Since the werewolf is human the rest of the month, it would be wrong to kill him. This, however, is not what werewolf hunter Cain thinks, whom Buffy and Giles meet while looking for the animal in the woods near Lovers' Lane. Cain is out for his twelfth pelt. Though the two groups do not get along, mainly because Cain is a rampant chauvinist, Giles and Buffy do learn that the werewolf will be attracted to places where teenagers hang out — it is the "sexual heat" that draws it.

Buffy and Giles rush to the Bronze, where Cordelia and Willow are busy complaining to each other about their men when the werewolf crashes the party. Buffy tries to catch it with a chain but fails, and the werewolf escapes. Cain shows up and points out that it will be Buffy's fault if the werewolf kills anybody.

Theresa Klusmeyer, one of the students that Larry was tormenting, is walking home late at night when she senses someone is following her. She begins to rush and is startled when Angelus steps out in front of her. She's suspicious at first, but when he tells her that he's a friend of Buffy's, she drops her guard and allows him to walk her home.

A body does turn up the next morning: Theresa's. It is revealed to the audience that Angelus is at fault for her death. Oz wakes up in the forest, naked and confused after changing back from his werewolf state before the audience's eyes. Recalling the bite he got, he calls his Aunt Maureen, and casually asks if his cousin is a werewolf. The answer is yes.

Oz bursts into the library with the rest of the gang, casually trying to figure out what happened: it is apparent that he has no memory of the previous night. Xander decides that Larry is the most obvious suspect because of his "dog" bite, aggression, and "excessive back hair." When he confronts Larry alone in the gym locker room, it turns out that he really is hiding something — his homosexuality. Xander unwittingly helps Larry out of the closet. Larry is then left with the false impression that Xander is also gay, as Xander tells him he's "been there," referring to his brief stint as a hyena. Back in the library, Buffy suggests to Willow that she might have to make the first move if she wants to speed things up with Oz.

Buffy realizes that the reports of Theresa's body didn't mention any mauling. She and Xander get to the funeral home in time to watch her rise as a vampire. Theresa passes along greetings from Angelus before Xander stakes her.

Cain busies himself casting silver bullets in preparation for the hunt. Willow takes Buffy's advice and visits Oz just before sundown. Oz is about to chain himself up but lets Willow in the house. Her rant about the mixed signals he is sending is interrupted by him changing into a werewolf. She flees the house screaming, the werewolf in pursuit. Cain hears the wolf's cry and joins the hunt. The werewolf is distracted by a scent which Cain set as a trap, and Willow escapes and then finds Giles and Buffy, who are about to start the hunt for Oz with a tranquilizer gun. All parties meet in a clearing in the forest, and in the scuffle, it is Willow who shoots Oz, saving everybody. Buffy bends Cain's gun with her bare hands using Slayer strength, rendering it useless, and tells him to leave Sunnydale. Cain balks, but wisely decides not to retort, and simply (and indeed, hastily) departs Sunnydale for good.

At school the next morning, Larry thanks Xander, and Willow seeks out Oz to talk. She points out that she is not fun to be around three days out of the month either and she accepts Oz werewolf or human. Oz and Willow share their first kiss, leaving Oz saying to himself: "a werewolf in love."

Xander: (to Cordelia) "Be gentle with me."
Cordelia: (to Willow) "You're first. I wouldn't want to be accused of taking your place in line."
Willow: "Oh, I think you pushed your way to the front long before this."
Cordelia: "Hey, I can't help it if I get the spotlight just because some people blend into the background."
Willow: "Well, maybe some people could see better if you weren't standing on the auction block, shaking your wares."
Cordelia: "Sorry, we haven't all perfected that phony 'girl next door' bit."
Willow: "You could be the girl next door, too. If Xander lived next to a brothel!" 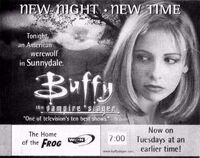 "Tonight, an American werewolf in Sunnydale."

Retrieved from "https://buffy.fandom.com/wiki/Phases?oldid=235098"
Community content is available under CC-BY-SA unless otherwise noted.