Past Lives, Part Three is the sixteenth issue of the Angel comic book series. Written by Christopher Golden and Tom Sniegoski, and illustrated by Christian Zanier, it was originally published on February 14, 2001 by Dark Horse Comics.

The Buffy/Angel crossover continues! In part three of "Past Lives," Angel confronts the woman who's out to destroy him, and barely escapes alive. Meanwhile, Buffy and Giles begin to uncover who and what is behind the vendetta against Angel. As the players begin to gather in LA (including some well-known faces from Sunnydale), the stage is set for a final confrontation. The entire crossover is brought to you by Christopher Golden (Buffy the Vampire Slayer Watcher's Guide), Tom Sniegoski (Realworlds: Batman), and Christian Zanier (Rising Stars).[1] 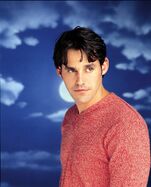 Retrieved from "https://buffy.fandom.com/wiki/Past_Lives,_Part_Three?oldid=222285"
Community content is available under CC-BY-SA unless otherwise noted.