"Pangs" is the eighth episode of the fourth season of Buffy the Vampire Slayer and the sixty-fourth episode in the series. Written by Jane Espenson and directed by Michael Lange, it originally broadcast on November 23, 1999 on The WB network. 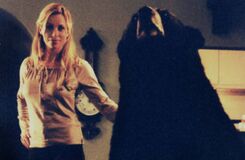 "All New WB Crossover Event: Only one thing could make Angel sacrifice his immortality. And tonight, she's coming to town."