Oz: Into the Wild

Oz must find the balance between man and monster...

Oz: Into the Wild is a Buffy the Vampire Slayer novel. Written by Christopher Golden, it was originally published in May 2002 by Pocket Books.

CYCLE OF THE WEREWOLF

Bitten by his werewolf cousin Jordy, Oz has struggled with the forces of evil that transform him to a beast three nights of each month. Those who care about him have learned to deal with his alter ego and accept him for who he is.

But Oz himself isn't sure who he really is. Part human, part dangerous animal, he must constantly question his basic nature, and worries that he might, as the wolf, bring harm to his loved ones. Therefore, with great difficulty, he leaves Sunnydale and sets off on a course toward enlightenment. Giles has told him of a Watcher in the Fiji Islands who might help him to transcend the lunar pull.

Oz's journeys take him from Tibet to Australia, and even to Hong Kong. Far-flung regions and exotic cultures provide new understandings of consciousness and human nature. Before long, though, he realizes that he must gain control of his inner wolf sooner rather than later — or risk finding himself not predator, but rather, prey... 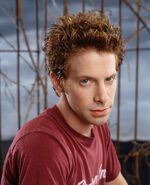 Cover in France
Add a photo to this gallery
Retrieved from "https://buffy.fandom.com/wiki/Oz:_Into_the_Wild?oldid=212876"
Community content is available under CC-BY-SA unless otherwise noted.