"Out of Mind, Out of Sight" is the eleventh episode of the first season of Buffy the Vampire Slayer television show, and the eleventh episode in the series. It was written by Joss Whedon, Ashley Gable, and Thomas A. Swyden, and directed by Reza Badiyi. It was originally broadcast on May 19, 1997.

Buffy must protect the thorn in her side, Cordelia, when she becomes the target of an invisible former student who wants revenge for the way she was treated in the past.

Cordelia is talking excitedly with Harmony and her friends about the spring and the May Queen competition when Buffy bumps into them, spilling various slayer paraphernalia. Buffy makes up an excuse about borrowing it from Giles for a history project.

In English class, Cordelia comments that in The Merchant of Venice, the character Shylock is self-involved and whiny. She likens it to a bicycle rider she ran over; the girl whined about her pain and ignored Cordelia's traumatic experience. The teacher seems agreeable to the viewpoint. After class, Cordelia arranges to talk with the teacher the next day to talk about her paper.

In the boys' locker room Mitch Fargo, Cordelia's boyfriend, is attacked by a floating baseball bat. Cordelia is outside campaigning for May Queen. As Xander and Willow mock Cordelia, referring to a past Buffy did not share, she feels left out and explains that she was the May Queen at her old school. The conversation ends when they hear that Mitch was found beaten. Principal Snyder arrives confirming Mitch was not dead. Before Mitch is taken to the hospital, he tells them what had happened. Principal Snyder stops Buffy entering the crime scene but Willow and Xander distract him, allowing Buffy to slip into the boys' locker room to find the word "LOOK" spray-painted on the lockers.

At the library, the Scoobies are stumped. They suspect a ghost. Meanwhile, Harmony asks Cordelia about Mitch's condition; Cordelia explains that he is alright but looking too bruised for the prom pictures. In a flashback, we see Cordelia and Harmony talking about Mitch's recent break-up with Wendy, and whether Cordelia would like to be his girlfriend. In the present, Harmony is pushed down the stairs and injures her ankle by the invisible force as Buffy approaches. Buffy follows an invisible source of laughter resulting in it bumping into Buffy before escaping.

Xander suggests a cloak of invisibility worn by the Greek gods. Buffy dismisses that theory because of the pettiness of the crimes. As the Scoobies disperse, Buffy follows the sound of a flute. In the library, Giles is surprised by Angel, who offers to get a book of prophecies, the Pergamum Codex. Another flashback sequence sees Cordelia and Harmony discussing a lecture and ignoring Marcie. In the present, Cordelia wins the May Queen award. Looking over Willow's list of missing kids, Buffy suspects Marcie when she sees she played the flute. Tracking Marcie, Buffy finds her hideout just as Marcie finds Mrs. Miller, Cordelia's literature teacher. She chokes her with a plastic bag. Cordelia, arriving a short while afterward, saves Mrs. Miller. An invisible hand writes "LISTEN" on the blackboard.

As Willow looks over Marcie's yearbook, she sees it is full of the generic "Have a nice summer!" greeting, something you write down in the yearbook of someone you don't know, showing nobody knew Marcie. (Xander explains that "Have a nice summer!" is "the kiss of death".) She is horrified to find her own greeting to Marcie, "Have a great summer!". Giles realizes that Marcie became invisible not because of magic but science; she became invisible because people treated her like she didn't exist. In a flashback sequence, we see Marcie being looked over by her teacher in favor of those around her even when she had her hand up. She puts it down in defeat and starts becoming invisible.

As the Scoobies realize that Marcie really is after Cordelia, the latter walks into the library asking Buffy for protection. They decide to use Cordelia as bait and to have Buffy bodyguarding her. As Cordelia is getting dressed, she confides in Buffy that she is lonely too, but being popular "beats being lonely by yourself". Marcie lures Willow, Xander, and Giles into the boiler room, where she closes the door and opens the gas, then grabs Cordelia as she is changing. Buffy follows Cordelia and finds her unconscious. Marcie surprises Buffy, kicking her and knocking her out.

Buffy wakes up, finding herself tied to a chair near Cordelia, similarly indisposed. They see the word "LEARN" on a curtain, and Marcie explains that Cordelia is the lesson, or will be when she makes a mockery of Cordelia's face by surgery. Buffy kicks the instrument tray at Marcie and frees herself from the ropes. Angel rescues the Scoobies and shuts off the gas. Buffy concentrates, listening to Marcie, knocks her into a curtain before knocking her out.

Two FBI agents, Doyle and Manetti, arrive to haul Marcie away. Cordelia comes by the day after the coronation to thank them for helping her, much to their surprise. However, her reaction when Mitch arrives shows she is not ready to renounce her popularity. Meanwhile, Marcie is taken to a school full of invisible students by the FBI. She sits down in class and opens her textbook. The title reads "Assassination and Infiltration", to which the now-homicidal Marcie chuckles and says: "Cool." 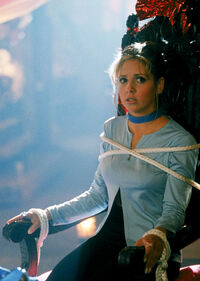 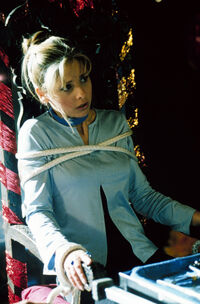 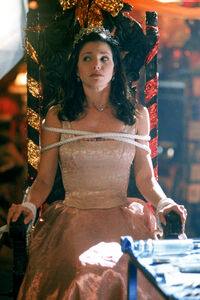 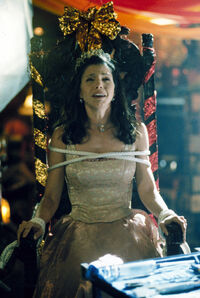 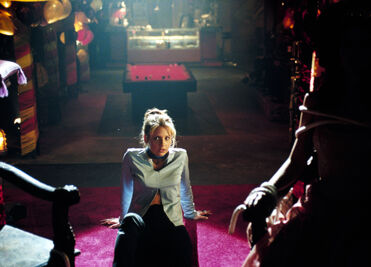 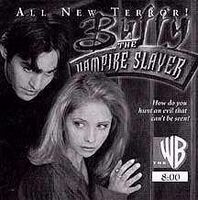 "All new terror! How do you hunt an evil that can't be seen?"

"When the sun goes down, she'll be waiting. Special Sunday episode!"
Add a photo to this gallery

Retrieved from "https://buffy.fandom.com/wiki/Out_of_Mind,_Out_of_Sight?oldid=184982"
Community content is available under CC-BY-SA unless otherwise noted.