Once More, with Feeling

Once More, with Feeling is an original cast recording of the Buffy the Vampire Slayer musical episode "Once More, with Feeling", in vinyl LP format. With artwork by Paul Mann, design by Chris Bilheimer and Eric Montes, and liner notes by Joss Whedon, it was originally released in March 20, 2019 by Mondo Records.

Mondo, in conjunction with Fox Music, is proud to present the premiere vinyl pressing of the soundtrack to the classic musical episode of BUFFY THE VAMPIRE SLAYER - Once More With Feeling.

This sixth season fan favorite mixes up the show's classic formula by introducing a series of seemingly innocuous musical numbers performed by the townsfolk of Sunnydale. It turns out, however, this is caused by the arrival of a demon named Sweet, who has more sinister plans for the titular Vampire Slayer and her sister Dawn. 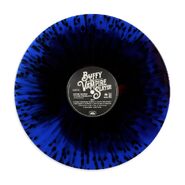 "Sweet" vinyl design
Add a photo to this gallery

Retrieved from "https://buffy.fandom.com/wiki/Once_More,_with_Feeling_(LP)?oldid=218718"
Community content is available under CC-BY-SA unless otherwise noted.