Bad Blood, Part Nine: Old Friend is the nineteenth issue of the Buffy the Vampire Slayer Classic comic book series. It was written by Andi Watson and illustrated by Cliff Richards.

For months now, Buffy and the gang have been dealing with superpowered vampires and slayer doppelgangers. Selke's finally coming out of hiding, but Buffy's not quite up to speed to deal with her. A massive conclusion to the nine-part "Bad Blood" story![1] 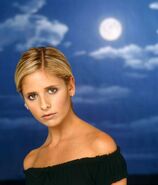 Retrieved from "https://buffy.fandom.com/wiki/Old_Friend?oldid=212088"
Community content is available under CC-BY-SA unless otherwise noted.