Note from the Underground, Part Three

Note from the Underground, Part Three

Note from the Underground, Part Three, also known as Hellmouth to Mouth, Part Three, is the forty-ninth issue of the Buffy the Vampire Slayer Classic comic book series. Written by Scott Lobdell with Fabian Nicieza and illustrated by Cliff Richards, it was originally published on September 25, 2002 by Dark Horse Comics.

Continuing her journey through Hell, Buffy finally runs into the cavalry – in the form of Angel, Faith, and Oz. Now it's up to this tensely reunited team to save the hordes of Hell, and return Sunnydale to the real world. Writer Scott Lobdell (X-Men, High Roads) is really heating things up in Buffy the Vampire Slayer. Don't miss the wide-screen, big budget Buffy spectacular that you couldn't fit on your TV screen![1] 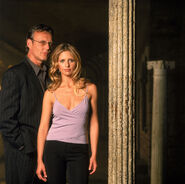