"Not Fade Away" is the twenty-second episode of the fifth season of Angel television show, the 110th episode overall, and the series finale. Written by Jeffrey Bell and Joss Whedon, and directed by Jeffrey Bell, it originally broadcast on May 19, 2004 on The WB network.

Angel and company spend the day as if it were their last as they prepare to bring down the evil Circle of the Black Thorn. Putting their lives on the line, Spike confronts a demon cult, Lorne faces off with Lindsey, Gunn takes on an evil senator and Angel battles Hamilton, the henchman of the Senior Partners.[1]

Angel has told the gang of his intention to destroy the Circle of the Black Thorn by killing its members while they're separate. The gang agree to help him, and Gunn asks about the possibility of including Illyria, but Angel points out she may not be on their side. Spike assures him Illyria is working with them, and is watching Drogyn. Angel realizes Illyria must have been attacked in order to abduct Drogyn from her protection and tells the gang they need to check on her, and he is forced to confess that he had to kill Drogyn. Before anyone can react, the gang are forced to continue their charade of infighting when the spell concealing them fades. The gang returns to Spike's apartment to find Illyria badly beaten, and they discuss if they can really trust Angel.

Marcus Hamilton, the Liaison to the Senior Partners, calls Angel to an emergency Black Thorn meeting, where Archduke Sebassis and the other members express doubts about Angel's loyalties. To prove himself, he must irrevocably relinquish the reward foretold in the Shanshu Prophecy. Izzy the Devil produces the original scroll and a pen, which he stabs through the back of Angel's hand so that he may sign in his own blood. Angel signs his name, giving up his chance that the vampire with a soul shall become human after playing a pivotal role in the Apocalypse.

Back at Wolfram & Hart, Angel speaks with Harmony about being human and asks if she ever misses it. She remembers being turned during her high school graduation, and muses that she knew her life would be over after high school one way or another. Angel remarks that its been so long since he was human, he can't remember what it feels like. Harmony tells Angel that she knows something big is happening and offers her support, and Angel informs he will be meeting with Sebassis later, and instructs her to distract Hamilton while he does so. Afterward, he meets with his old enemy Lindsey McDonald and asks for his help in destroying the Black Thorn; Lindsey is suspicious of Angel's offer, but agrees. Returning from his meeting with Lindsey, Angel informs his friends that they are killing all the Black Thorn members tonight. Angel advises his friends to spend the rest of the day as if it were their last since it "probably is."

Angel visits his son, Connor, at college. Connor reveals that he knows that Angel is his father; his old memories are now "mixed in" with his new ones, and he understands and appreciates why Angel gave him new memories. Lorne has serious reservations about Angel's plan, and his mood is dark and somber. He sings "If I Ruled the World" at a demon karaoke bar. Lindsey spends the day with Eve, who expresses suspicion about Angel. Lindsey, however, trusts Angel's plan; since he is fighting on Angel's side, he believes that he will receive fair treatment. Gunn spends his day helping Anne, who still maintains a homeless shelter in Gunn's old neighborhood. He asks her what she would do if she found out that everything she did — everything she fought for — was for nothing, and she tells him she would continue to unload the supplies for the shelter. Gunn smiles; that was the answer he had been looking for. Spike goes to a bar and, after drinking for courage, goes onstage and recites the completed version of a poem that he originally wrote for Cecily to a crowd of rough motorcyclists at an open mic. The crowd goes wild with cheers and applause. A triumphant Spike laughs and announces that his next poem is called "The Wanton Folly of Me Mum." Wesley spends his day in his apartment tending to Illyria's wounds. He tells her there is nothing else he wants and nowhere for him to be. She recognizes that the only place he wants to be is with Fred, and she offers to comfort him in Fred's form. He refuses, explaining that because he does not plan to die tonight, he would not accept the "lie" of Illyria in Fred's form.

That night, Angel explains that they are taking a divide-and-conquer approach to the demon killing: Gunn is to eliminate the demonic Senator Helen Brucker and her vampire bodyguards; Wesley is to attack Cyvus Vail, a powerful demon sorcerer; Illyria will take out Izzy the Devil and three other members of the Black Thorn; Spike will fight the demonic Fell Brethren and retrieve the child that was recently given to them; and Lorne and Lindsey will fight the Sahrvin Clan. Angel tells them that he will take out the chairman Archduke Sebassis. Once they complete their missions, he says, they are all to meet in the alley north of the Hyperion Hotel for the expected onslaught by the Senior Partners. Everyone heads out, with Wesley and Gunn putting their past differences behind them by shaking hands. As they leave, Lorne tells Angel that this is the last thing he's going to do for him, and that they will never see him again. Spike asks Angel if there's a chance the Shanshu Prophecy will come true and one of them will become human if they make it through the coming battle. Angel assures Spike that they're not going to make it.

In his office, Angel is confronted by Hamilton, who says he knows Angel intends to kill Sebassis — Hamilton seduced Harmony, who betrayed Angel's plans. Angel tells Harmony, despite her protests, that he knew she'd betray him eventually as she's a vampire without a soul. He fires her and orders to leave the building, but allows her to collect a pre-written letter of recommendation. With that, Harmony leaves wishing both Angel and Hamilton luck. Angel fights Hamilton, but finds himself on the receiving end of powerful blows. Hamilton knocks Angel across the room, reminding him that he had due to live an unremarkable of drinking and whoring if he hadn't met Darla that fateful night and became a vampire. He then sneers that all Angel does is let down everyone around him, reminding him how Doyle, Cordelia and Fred all died following him, before asking if he really thought he had a chance to kill Sebassis; Angel replies, "I already have." During the last meeting with the Circle of the Black Thorn, Angel poisoned Sebassis' demon servant, knowing that Sebassis drinks his servant's blood; he figured that Hamilton was the one he really needed to kill and knew that Harmony would tell Hamilton about Angel's plan.

At Senator Bruckner's campaign office, Gunn kills the senator with a thrown axe, but is still surrounded by dozens of her vampire bodyguards. Spike, disguised in a long black robe, sneaks into the Fell Brethren's living quarters and lifts the baby out of a ceremonial bassinet. Faced with several angry demons, he goes into battle, with a sword in one hand and the baby in the other. Meanwhile, Illyria easily destroys Izzy and other members of the Black Thorn. As Lorne and Lindsey leave the dead Sahvrin clan, Lindsey remarks on how strange but nice it feels to be fighting on the side of good. Lorne tells Lindsey that might be true today, but he knows it probably won't last. Lindsey argues he is capable of change and offers to sing, but Lorne shoots Lindsey in the chest, revealing his one last job for Angel. Lorne tells him, "You're not part of the solution, Lindsey. You never will be." Lindsey dies, angry and stunned it wasn't Angel himself who killed him, but instead one of his "flunkies." With his job done, Lorne leaves the building and the team behind.

Wesley attacks Cyvus Vail, who quickly recovers and restrains Wesley with magic, then stabs him with a large knife, twisting it inside. Wesley releases a final burst of magic, momentarily stunning Vail, and crashes to the floor. Illyria storms in, distraught upon finding Wes mortally wounded. She again offers to lie to him by appearing as Fred, and this time he accepts. Wesley tells her that he missed her, and she kisses him, reassuring him that they will be together again soon. Wesley tells her that he loves her. Weeping, she tells him that she loves him too; he dies in her arms a few moments later. Vail awakens, to find a crying woman holding Wesley's body. He taunts her as she stands before him, daring her to take her best shot. As her fist flies through the air, she transforms back into Illyria and her fist shatters Vails head, causing it to explode.

Back at Wolfram & Hart, Angel is losing the fight with Hamilton. Hamilton asks why Angel continues fighting when he's signed away his Shanshu and will thus gain nothing. Angel replies that the people who don't care about anything will never understand the people who do. Unimpressed, Hamilton prepares to stake him, but Connor appears and knocks Hamilton away from his father. The two take on Hamilton together, but even with their combined strength, they cannot inflict a single bruise. Hamilton boasts that the power of the Senior Partners runs through his blood. Angel says, "Can you pick out the one word you probably shouldn't have said?" Rushing at Hamilton, Angel assumes his vampire form and draws Hamilton's power by drinking his blood, beats him to the ground then snaps Hamilton's neck with a fist blow to the head. The building begins to shake, and Angel tells Connor to leave. Connor protests that Angel will be destroyed, but Angel assures his son that as he won't be truly gone as long as Connor is ok. Connor reluctantly leaves, and Angel then finds Eve to tell they're they're getting "kicked out of the garden." Eve refuses to leave without Lindsey, only for Angel to tell her that Lindsey isn't coming. Eve realizes that Angel has had him killed. Angel grabs a sword off his weapons rack and runs out, while Eve wonders where she has left to go.

The survivors meet in the back alley of the Hyperion Hotel in the pouring rain. Angel arrives to find Spike already waiting, having successfully rescued the baby and destroyed the Brethren. Gunn shows up next, mortally injured. Illyria arrives seconds later and informs them of Wesley's death, saying that she grieves for Wesley and wishes "to do more violence." Suddenly, the vast demon armies of the Senior Partners advance on the four. Despite knowing they have no chance of surviving, all agree to go down fighting. As the demon army approaches, Angel expresses interest in taking on the dragon. As the group goes into battle, Angel swings his sword and tells them: "Let's go to work." 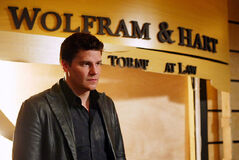 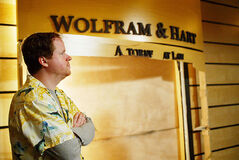 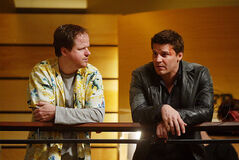 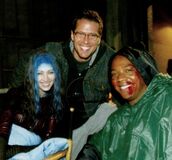 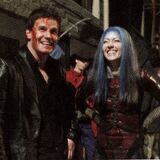 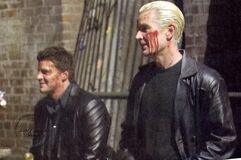