Edit
watch 03:36
Wiki Targeted (Entertainment)
Do you like this video?
Play Sound

"Normal Again" is the seventeenth episode of the sixth season of Buffy the Vampire Slayer television show, and is the 117th episode in the series. Written by Diego Gutierrez and directed by Rick Rosenthal, it originally broadcast on March 12, 2002 on UPN.

A demon doses Buffy with a powerful chemical that causes her to hallucinate, convincing the Slayer her parents are alive and Dawn never existed.[1]

Buffy searches newly rented houses for the Trio's hideout. The three discover her on their surveillance equipment, then she gets a bit too close. While they hide in the basement, Andrew calls on a demon that attacks Buffy and starts a fight. The demon grabs Buffy and stabs her with a needle-like part of its body. Suddenly in a mental hospital, Buffy cries out as she's held by two orderlies and stabbed with a needle. Buffy wakes up alone outside the Trio's lair, hurt and confused, and walks home.

Willow prepares herself for talking to Tara, but spots her greeting another woman with a quick kiss; Willow walks away, wounded. Tara notices her retreating, but it's too late to chase after her. Working at the Doublemeat Palace, Buffy flashes again to the mental hospital, where doctor Berris announces it's time for her drugs.

Willow and Buffy talk about Xander's disappearing act and Willow's attempt to talk to Tara. Xander surprises the girls by showing up at the house. He wonders about Anya and how to repair his relationship with her. The girls tell him Anya left a few days ago and try to reassure him that everything will work out in time.

Patrolling at the cemetery, Buffy runs into Spike and they talk about the events of the wedding that didn't happen. A confrontation begins between Xander and Spike over Xander abandoning Anya on their wedding day. Willow tries to break it up while Buffy collapses. Xander manages one punch to Spike before his attention is drawn by Buffy. At the mental hospital, a doctor informs Buffy that she's been hallucinating in the hospital for the past six years and everything she knows in Sunnydale is a delusion. She's even more confused when both Joyce and Hank Summers appear, then Buffy falls back into the Sunnydale world.

Willow and Xander get Buffy home and she recounts what she saw and was told at the mental hospital. While Willow organizes a plan to research, Buffy falls back to the mental hospital. The doctor explains to her parents that she's been catatonic from schizophrenia for all of the past six years, except for the brief period of lucidity which Buffy dimly remembers as her time in "heaven", and that her life as the Slayer has been an elaborate improvised hallucination she has constructed for herself in her mind. He also explains what Buffy realizes is its extreme improbability and illogicality compared to the "mental patient" scenario.

In Sunnydale, Warren and Andrew return to their hideaway with boxes after leaving Jonathan alone. Leery, Jonathan questions the contents of the boxes and tries to leave the house himself. Warren doesn't agree with that idea and convinces Jonathan to stay in the basement.

Willow shows Buffy a picture of the demon that stung her, a Glarghk Guhl Kashmas'nik, and tries to comfort her friend. Buffy then makes a confession to Willow: in the beginning of her Slayer life, she told her parents about vampires and they "freaked out". As a result, she was put in a clinic for her supposed insanity. Buffy wonders if she's still there and Sunnydale really doesn't exist, but Willow assures her that isn't true. Xander and Spike patrol for the demon that hurt Buffy; between the two of them, they subdue the demon with force and tranquilizer darts.

Dawn comforts Buffy, who dazedly notes that Dawn has been misbehaving and the problems need to be dealt with. Back in the hospital, her mother reminds Buffy that Dawn doesn't exist. Dawn realizes this through Buffy's babbling and rushes from the room. Xander and Spike wrestle the demon into Buffy's basement then chain it, while Willow breaks off its stinger to make the antidote, which she must synthesize without using magic.

Later, Willow presents the antidote to Buffy in a mug and leaves her to drink it. Alone with her, Spike urges her to abandon the life that's grown so hellish for her and choose peace with him, also threatening Buffy to either tell her friends about their sexual relationship or he do it for her. He also leaves and Buffy pours the antidote in the trash. Back to the hospital, Buffy tells the doctor and her parents that she wants to be healthy and rid of thoughts about Sunnydale. The doctor tells her that she has to do what is necessary to destroy the elements that draw her back there, like her family and friends, to truly be healthy.

Willow and Buffy are talking in the kitchen. Xander arrives at the house and finds Buffy alone, so he talks to her about Spike and his obsession. This is interrupted when she knocks him out cold and drags him into the basement, where Willow is already bound and gagged. Buffy finds Dawn upstairs and chases her through the house, while Dawn pleads that she is real. She is bound and gagged in the basement with the others — and the chained demon. In the mental hospital, the doctors urge Buffy to make her task easy on herself, so Buffy unchains the Glarghk Guhl Kashmas'nik in the basement to kill her friends for her.

Xander pleads with Buffy to free his hands, but she retreats under the stairs. Meanwhile, Tara shows up at the house and finds everyone in the basement. She uses magic to free Willow and Dawn and attack the demon, but the Glarghk Guhl Kashmas'nik is too strong for them. Buffy grabs Tara's leg, making her fall down the stairs and knocking her unconscious. At the hospital, Joyce encourages Buffy to fight against the Sunnydale reality, telling her that she has the strength to fight against the harshness of the world and must fight it because she has people who love her. Buffy thanks her mother for helping her make her choice, then says goodbye to her.

Buffy wakes up in Sunnydale to save her friends. She dispatches the demon easily and reconciles with her friends, urging them to quickly make her that antidote while she stays on guard against relapsing again.

In the hospital, Buffy is still sitting in her corner of the room, now completely unresponsive as the doctor shines light into her pupils. He tells Buffy's parents that she's gone. 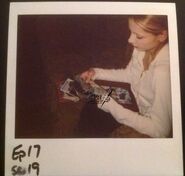 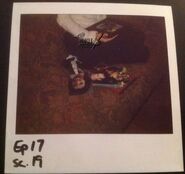 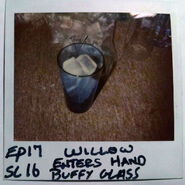