"No Place Like Home" is the fifth episode of the fifth season of Buffy the Vampire Slayer and is the eighty-third episode altogether. Written by Douglas Petrie and directed by David Solomon, it originally broadcast on October 24, 2000 on The WB network.

ALL IN THE FAMILY — An unseen evil comes to Sunnydale that that helps Buffy discover more about her little sister Dawn and the girls are distressed and confused when their mom suddenly becomes ill without any clear explanation, medical or supernatural.[1]

Two months ago, several monks rush to perform a ritual while a powerful force of some sort threatens their lives. In the present, Buffy stakes a vampire outside an abandoned building, and then gets caught by the night watchman, who thinks she's a teen looking for a rave. As she turns to leave, he tells her not to forget her glow-ball, an orb which Buffy doesn't recognize but takes to investigate.

Buffy makes breakfast for her mom, who is still suffering from headaches that the doctors can't explain. Dawn takes credit for the breakfast, telling Joyce that Buffy only helped. Joyce and Dawn bond (Joyce calling Dawn her "little pumpkin belly"), which leaves Buffy feeling like an outsider. Giles' big opening is less than successful at first, but eventually, the Magic Box gets to be so popular that he can't handle it all on his own. Buffy presents the orb to Giles, who can't explain it right away.

While picking up a prescription for her mother at the hospital, Buffy encounters the night watchman again as he's being strapped down to a gurney. He's less than stable, but he manages to warn Buffy that she will be attacked through her family.

A monk works on a blueprint in an empty building just as the Beast smashes through a large steel door, revealing itself to be a blond female. The Beast tries to torture information about the Key out of the monk, but he won't tell her anything. She starts to speak crazily until she puts her fingers into the head of a security guard and seems to suck the life force from him.

Buffy assumes that the danger she was warned about is what is causing her mother's headaches. Anya recommends to Buffy that she perform Tirer la Couverture, a ritual to reveal any spells that may be affecting her family. Buffy, eager to help Riley feel needed, offers to let him help her with the spell. He realizes what she's doing; then they talk and agree to take care of each other.

Buffy performs the ritual in her bedroom, then walks around her house to look for anything unusual. She runs into Joyce, and finds nothing strange about her which proves that the headaches are not being caused by supernatural means. However Buffy does see something unusual: Dawn's image flashes in and out of pictures around the house. When she enters Dawn's room, Buffy sees Dawn's possessions, bed, desk, and decorations also fading in and out, as well as Dawn herself. Buffy confronts Dawn about it, and she concludes that Dawn isn't her sister. Buffy physically attacks and threatens Dawn, telling her to stay away from her mother, but Dawn appears truly confused and doesn't understand Buffy's sudden change in attitude.

Giles calls to tell Buffy about the orb, a Dagon Sphere, and its purpose of protection from an unnamed evil (warning her that things that are unnamed are usually very dangerous). Buffy returns to the abandoned building in hopes of finding more information. Buffy encounters Spike lurking outside her home and demands to know what he was doing there. She is unsatisfied with his explanation, but lets him off with a warning, and he becomes frustrated. Looking down, Buffy notices a bunch of Spike's discarded cigarette butts; he must have been loitering there for quite some time. Shaking her head, she proceeds to return to the warehouse as Dawn watches the whole exchange from the window.

Buffy comes up against the Beast, who quickly proves to be far too powerful for the Slayer to handle. After taking quite a beating, Buffy is able to escape with the monk. The Beast throws a tantrum, causing the room to collapse on her, which delays her pursuit. Back at the Magic Box, Anya makes comments about how to run the store, of one of these comments references a "Hand of Glory" (dried, pickled, severed hand of a hung male criminal with paralyzing powers) Giles offers Anya a job when he realizes it is too much for just one, that she's good with organizing the stock and that she enjoys handling the money.

In his last moments of life, the monk warns Buffy that she must protect the Key. He tells her that the Key is a collection of energy put into a human form — Dawn's form. They sent her to the Slayer to be protected from those looking for it. Buffy doesn't understand as she, her mom and all her friends have memories of Dawn's whole life, but the monk tells her that her memories are false. He also tells her that Dawn has no idea she is anything but human, and now not only needs the protection of the Slayer, but also the love of a sister.

The monk dies, and Buffy returns home shaken by her new knowledge to find Dawn and Joyce waiting for her. Buffy apologizes to Dawn, who eventually accepts and the two girls are able to relate on at least one subject: their concern for their mother. 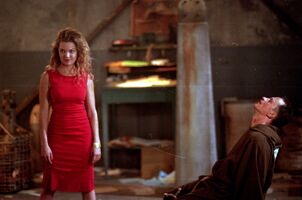 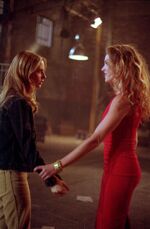 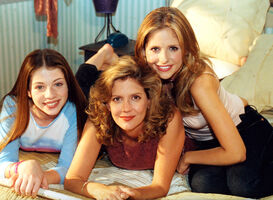 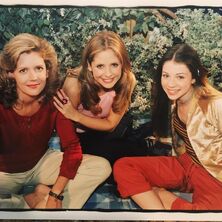 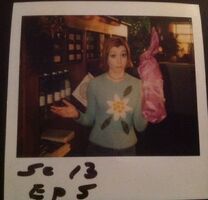 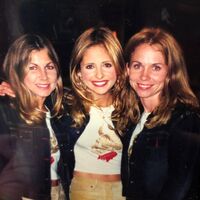 "No one suspects the truth about Dawn. But that's all about to change."