One Girl in All the World

New vampire[1][2][3] was a breed of vampires that were sired after the creation of a new Seed of Wonder. These vampires differed from their older counterparts in that they possessed newer and greater powers than the latter and even fewer vulnerabilities. Their existence was due to the restoration of magic on Earth paving the way for new universal rules to be formed;[1] because most humans viewed Dracula as the standard model for vampires, any vampires created following the restoration of magic possessed many of his abilities.[2]

After magic was restored to Earth by the new Seed of Wonder, Vicki awoke in a zompire nest in Santa Rosita as a newly-sired, fully-intelligent vampire with immunity to sunlight and the power to morph into a giant bat.[4]

Vicki and a pack of similar vampires formed a temporary alliance with the Scooby Gang in order to exterminate the town's zompire epidemic. Buffy timed the battle with the hordes of zompires to end at sunrise, hoping to drive Vicki and her friends away so the Slayer could regroup before inevitably having to kill Vicki and her companions. However, Vicki and her friends surprised the Scoobies when they were unharmed by the sunshine, and began to transform into bats, panthers, and wolves. Andrew recognized the similarity of their powers to those of Dracula and Toru, but Willow noted that she felt that the magic were newer, different, and inherent stronger.[5]

New vampires were almost physically indistinguishable from regular vampires, morphing into a vamp face with sharp teeth, pronounced brow ridges, and no eyebrows. However, their eyes would become bright red instead of yellow.[5] Vicki also exhibited the ability to assume her vampire eyes and fangs without fully assuming her vamp face.[6]

Not only do the new breed of vampires possessed new powers, such as shapeshifting and daywalking, but the normal physical powers inherent in a vampire were superior to the old breed.

With the exception of sunlight, the new vampires possessed the common weaknesses of vampires, such as fire, beheading,[1] holy water,[2] and impalement through the heart with a wooden object, though they were harder to stake.[5]

Vicki demonstrates her strength by pushing a car to its side 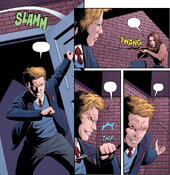 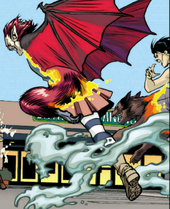