"New Moon Rising" is the nineteenth episode of the fourth season of Buffy the Vampire Slayer and the seventy-fifth episode in the series. Written by Marti Noxon and directed by James A. Contner, it originally broadcast on May 2, 2000 on The WB network.

OZ COMES HOME TO WILLOW — Willow and her friends are stunned when Oz returns to Sunnydale claiming he still loves Willow and has his full moon frolics under control. Meanwhile, Willow tries to sort out her feelings for Oz and finally tells Buffy about her new relationship with Tara. But when the moon sets, a transformed Oz is captured by The Initiative and an unlikely source breaks his alliance to come to the rescue.[1]

Willow and Tara talk about Tara getting a cat as a pet. At the Scooby Gang meeting, Buffy explains that there is little going on, but as usual, Giles knows that means trouble. When Anya comments, in her usual too-direct way, on what a waste of time the meeting was, Giles finally takes issue with her snide remarks and an argument begins to brew, only for everyone to be shocked into silence when Oz appears in the doorway. Oz arranges to talk with Willow later, and, after Oz leaves, Tara makes an excuse saying she has to go too, clearly in distress.

That night, at the cemetery, Buffy and Riley immobilize a demon and call for the Initiative to catch it. He asks about the uncomfortable situation earlier, and Buffy tells him how bad Willow and Oz's break-up really was, mentioning that Oz is a werewolf. Surprised, Riley says that Willow seems smarter than to date a dangerous guy, and Buffy explains defensively that love isn't rational, and calls him a bigot. Riley assures Buffy he isn't talking about her, but she cuts him changing the subject.

Meanwhile, Oz takes Willow for a walk outside during a full moon, showing her that he doesn't transform despite it. While in Tibet, with the help of herbs, charms, chanting, and meditation, he's learned to control the wolf inside. Oz wants to get back together with Willow, but she is reluctant. Graham Miller patrols with a team and they are all attacked by a four-legged demon, closely resembling a werewolf. Willow and Oz talk all night about their lives while they were apart. Tara comes by while Willow is away, and upon having Oz answer the door she gets nervous and leaves.

Buffy wakes up at Riley's but she's very distant from him. They talk about the night before in the graveyard and Riley's reaction to Oz, then Riley leaves after hearing news about Graham getting hurt. Willow shocks Buffy with the news about Oz being able to control the wolf. Buffy is even more shocked as Willow subtly explains that her relationship with Tara is now serious and that complicates things with Oz. Adam goes to Spike for his help in exchange for getting the chip out of Spike's head.

Willow tells Tara that she and Oz only talked the night before, and then they hug. Oz and Tara have a confrontation and after smelling Willow on Tara, Oz concludes that the two are romantically involved. He loses control, and starts to change into a werewolf. Werewolf Oz chases Tara into a classroom, and then Riley and the Initiative commandos take Oz away. The gang meets up and makes a plan to free Oz. Oz is kept caged at the Initiative and just as Riley is about to shoot him dead, he changes back into his human form.

Despite Riley's attempts to help, the scientists start performing tests on Oz. Spike shows up at Giles' place and offers to lead Buffy and the gang into the Initiative. Riley sneaks in, gives Oz some clothes and tries to help him escape. On the way out, they get caught. Colonel McNamara lectures Riley about betraying the Initiative on so many levels and how he will be court-martialed.

Dressed as commandos and scientists, Spike and the gang sneak into the Initiative through a back door. Adam secretly helps them by running operations through a computer and helping them shut down the power for most of the city.

Holding the Colonel hostage, Buffy gets Riley and Oz free, Riley leaving the Initiative for good. Now that his life is in danger, Riley camps out in the now derelict Sunnydale High School with Buffy at his side. He confesses that he was wrong about Oz, and then Buffy volunteers to tell him about her past, and hopes that it won't destroy their relationship. In Oz's van, Willow and Oz say their sad goodbyes, and Oz leaves town again to escape the Initiative and Willow, who unintentionally is the cause of him turning into a werewolf.

Willow goes to Tara's, bringing her a candle. Tara tells Willow that she should be with the person she loves, and Willow replies that she is. Tara blows out the candle. 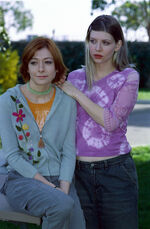 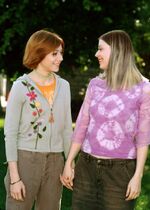 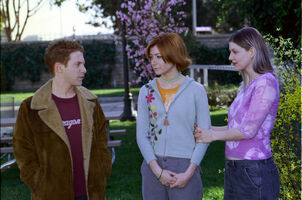 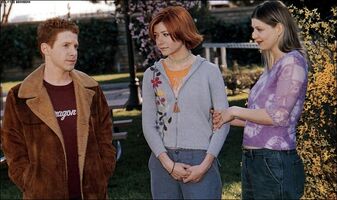 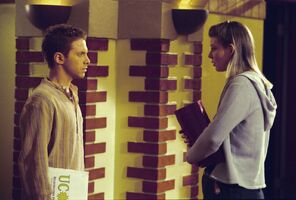 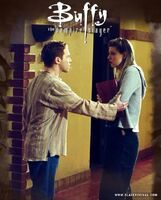 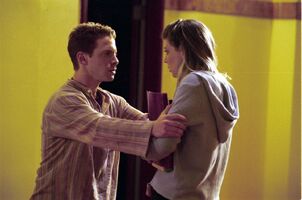 "Oz returns for the woman he loves only to find… an unexpected rival."