New Kid on the Block, Part Two is the seventh issue of the Buffy the Vampire Slayer Classic series. Written by Andi Watson with Dan Brereton and illustrated by Hector Gomez, it was originally published on March 31, 1999 by Dark Horse Comics.

Recipe for action: take one Buffy Summers, add three quarts of evil, a pinch of high-school high jinks, and blend well, for the high-octane monthly adventures of everyone's favorite Chosen One! The gang's well-intentioned slumber party has gone awry, and the trouble grows as the night deepens. Things are not always what they seem, and in this case, the new girl might not be telling the whole story… and it could cost Buffy more than a game of Truth or Dare.[1]

A group of vampires invade the slumber party and Buffy dusts them all. Angel arrives and uncovered Cynthia's plans: she arranged the lavish slumber party for her vampiric father and his friends to crash and feast on.

Suddenly, Cynthia reveals her true appearance as a demon. Before she causes any real damage, the Hellmouth reclaims its own and sucks her back through the pool. 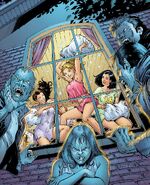 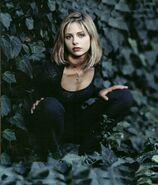 Retrieved from "https://buffy.fandom.com/wiki/New_Kid_on_the_Block,_Part_Two?oldid=227525"
Community content is available under CC-BY-SA unless otherwise noted.