Never Kill a Boy on the First Date

Never Kill a Boy on the First Date

"Never Kill a Boy on the First Date" is the fifth episode of the first season of Buffy the Vampire Slayer television show, and the fifth episode in the series. Written by Rob Des Hotel and Dean Batali, and directed by David Semel, it originally broadcast on March 31, 1997 on The WB network.

A CRANKY SLAYER IS A CARELESS SLAYER — Buffy tries to maintain some semblance of a normal teenage social life by opting for a hot date instead of helping Giles protect Sunnydale from a violent vampire prophecy. As she's blinded by love, Buffy ignores the signs of the dark forces aligning against her. Meanwhile, while Buffy's being romanced, The Master is plotting her demise by invoking the wrath of the "Anointed One," a great warrior vampire who is The Master's most powerful weapon against the slayer.[1]

The Master reads a prophecy from the Writings of Aurelius to his minions:

"And there will be a time of crisis, of worlds hanging in the balance. And in this time shall come the Anointed, the Master's great warrior. And the Slayer will not know him, will not stop him, and he will lead her into hell. As it is written, so it shall be. Five will die, and from their ashes, the Anointed One shall rise. The Brethren of Aurelius shall greet him and usher him to his immortal destiny."

Buffy finally gets a date when sensitive hunk Owen shows an interest in her. To Giles' exasperation, all Buffy can think about is impressing him with an uncharacteristic interest in poetry. In the school cafeteria, Buffy has to fight off Cordelia to sit at one table with Owen, but it is worth it. He asks Buffy out on a date to the Bronze that very evening.

However, Giles has found out about the prophecy from the symbol on a ring they found in the cemetery. He is convinced that the Anointed One will rise that night, and so despite Buffy's protests, they spend hours sitting on graves waiting for a vampire to rise. None does, however, and though Giles is certain that his calculations are correct, he calls their stakeless stake-out quits. Buffy rushes to the Bronze, only to see Owen dancing with Cordelia. Crushed, she leaves without trying to talk to him.

At the same time, in a van on the way to Sunnydale, a man stands up and begins to lecture the other passengers on God's judgment, quoting prophecies. Suddenly, a vampire walks in front of the van, causing it to crash. Other vampires swarm the wreck, attacking the passengers, including the religious man.

The next morning, Owen asks Buffy out on another date that night and even gives her a pocket-watch so that she doesn't miss it this time. Buffy jumps at the opportunity while Xander is left to stew in his jealousy.

When evening comes, Giles shows up at Buffy's house, waving a newspaper that shows five people died when the van crashed, among them the suspected murderer Andrew Borba, the man who was quoting prophecies. Buffy insists on going to the Bronze, though, so Giles decides to check the Sunnydale Funeral Home himself. Unfortunately, there are vampires present to get the Anointed One, and they trap Giles in a room. Xander and Willow have followed him, though, and run back to the Bronze to get Buffy.

There, first Cordelia, then Angel try to come in between Buffy and Owen. Finally, Xander and Willow manage to get her to come to the funeral home by pretending to be a couple that wants to do something daring on a double date. When Buffy figures out what has happened, she tries to dump Owen; but unfortunately, he tags along. Even worse, he is present in the funeral home when Borba rises as a vampire. In the fight, Owen is knocked unconscious. Buffy, angry that he has "killed [her] date," kills Borba by sliding him into the furnace while still alive — or rather, still undead.

The next morning, Owen is extremely excited about what they've been through and wants more. This is what he likes about Buffy, he says, and almost being killed made him feel alive. Buffy realizes that there is no way that she can have a relationship with him; sooner or later, he will get himself killed. With a heavy heart, she breaks up with him.

Giles tries to comfort her by telling her what a burden it was for him as a ten-year-old to find out his destiny was to be a Watcher, when he would rather have been a fighter pilot or possibly a grocer. Both agree that at least the Master will be unhappy too because the Anointed One was destroyed.

But in his underground lair, the Master is overjoyed as he welcomes the real Anointed One — not Borba after all, but a young boy who was on the van with him. 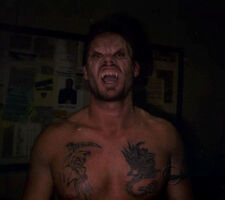 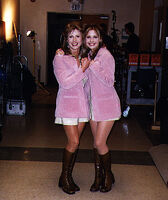 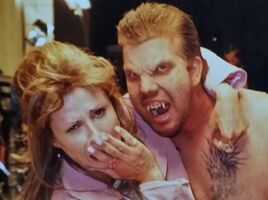