Monster Smackdown is the fifth book of the Buffy the Vampire Slayer Roleplaying Game series. It was originally published in March 2003 by Eden Studios.

Birds gotta fly, fish gotta swim, and a Slayer's gotta have something to slay. Fortunately for her, there's no shortage of vamps, demons, nasties, and Big Bads wandering around out there. And when the latté hits the fan, knowing an Acathla from a Gorch can save the world. The keys to combating these charmless creatures of nightmare are all here, in vivid detail.

Hey, nobody said living on the Hellmouth was going to be all sunshine and stylish garb.

Monster Smackdown is a supplement for the Buffy the Vampire Slayer roleplaying game. In it, you will find: 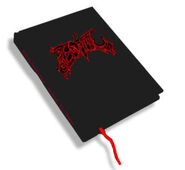 Cover logo
Add a photo to this gallery

Retrieved from "https://buffy.fandom.com/wiki/Monster_Smackdown?oldid=213978"
Community content is available under CC-BY-SA unless otherwise noted.