“This world is so new, so exciting. And I can see all of it. Everything flows through me. I know the secrets of your kings. But none of it compares to having form again. To be able to walk… to touch… to kill.”
―Moloch the Corruptor[src]

Moloch the Corruptor, alias Malcolm Black, was a demon who charmed and mesmerized his victims with promises of love, power, and knowledge.

“Do you love me? I will give you everything. All I want is your love.”
―Moloch[src]

Moloch originally lived in Cortona, Italy, in 1418, where he apparently mesmerized and killed several of the town's denizens. Just after Moloch killed Carlo, an order of monks led by brother Thelonius trapped Moloch in a tome through the Circle of Kayless, hoping the book would never be found in fear that it would release Moloch.[1]

Over five hundred years later, in 1997, Rupert Giles somehow acquired the book for Sunnydale High School library. Moloch was accidentally released when Willow Rosenberg scanned the book's text, thus activating the release spell that had bound him to the book. Under normal circumstances, Moloch would have emerged back into the real world when his book was read, but the unique nature of his release in this instance made so that he was instead released onto the Internet.

Now in virtually complete control of potentially any computer system he could access, Moloch went on to woo Willow while posing as an eighteen-year-old boy called Malcolm Black, simultaneously recruiting Willow's fellow "computer geeks" David Kirby and Fritz Siegel. He also charmed the scientists of Calax Research and Development to help him as he attempted to construct a new body for himself, eventually constructing a powerful robotic body while retaining a 'wireless' connection to the Internet that allowed him to access any information he wanted. Meanwhile, he had Fritz follow Buffy Summers when the Slayer began investigation "Malcolm" and then ordered him to kill her. Moloch also had Fritz kill Dave when the latter had a qualm of conscience after the attempted murder of the Slayer.[1]

“I was omnipotent! I was everything! Now I'm trapped in this shell…”
―Moloch[src]

He claimed to genuinely love Willow due to her releasing him into this new world, bringing her to his facility after the completion of his new body and offering her a place at his side in his new world order, but attempted to kill her after she rejected him. Aided by technopagan Jennifer Calendar, Giles attempted to bind Moloch back in the book- using a Circle of Kayless based on Jenny's Internet contacts as they lacked the available people to form a physical circle — but the spell initially simply cut Moloch off from the Internet, and trapped him in the robotic body instead. In the ensuing confrontation, Buffy tricked Moloch into punching into a circuit breaker, which overloaded the body's circuits, caused it to explode, and killed him.[1]

“A very deadly and seductive demon. He draws people to him with promises of love, power, knowledge. Preys on impressionable minds.”
―Rupert Giles[src]

After Willow had scanned Moloch into a computer by a accident, Moloch transformed from a demonic being into a digital entity. As a digital entity, Moloch possessed the following abilities.

In his demonic form, he possessed and demonstrated the following abilities. 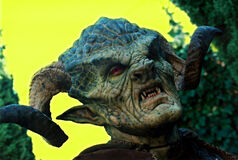 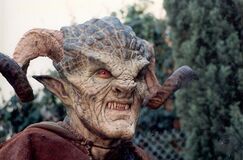 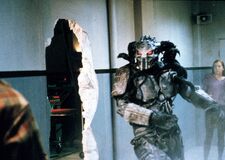 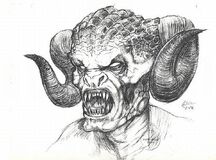 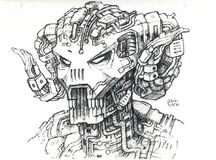 Concept art
Add a photo to this gallery

Retrieved from "https://buffy.fandom.com/wiki/Moloch_the_Corruptor?oldid=196160"
Community content is available under CC-BY-SA unless otherwise noted.