Michael Gershman was a cinematographer and director, as well as the director of photography for the majority of Buffy the Vampire Slayer episodes.

In addition to Buffy, Gershman also served as a director and cinematographer for the series Crossing Jordan. He spent more than forty years working as a cinematographer and camera operator in motion pictures, including The Deer Hunter (1978), Heaven's Gate (1980), Midnight Run (1988), The Golden Child (1986), and We Were Soldiers (2002).

Gershman earned an Emmy Award nomination as "Outstanding Cinematography for a Single Camera Series" for his work in episode "Hush".[1]

Below is a list of works by Gershman in the Buffyverse.

Gershman behind the scenes for Buffy the Vampire Slayer. 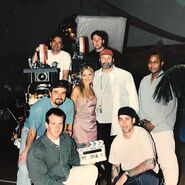 Retrieved from "https://buffy.fandom.com/wiki/Michael_Gershman?oldid=230226"
Community content is available under CC-BY-SA unless otherwise noted.