Not all of the vampires in this bloodline belonged to the Order of Aurelius, as Angel refused to live under the Order's strict codes.

Drusilla before being sired by Angelus 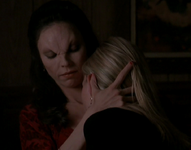 Drusilla siring Darla
Add a photo to this gallery
Retrieved from "https://buffy.fandom.com/wiki/Master%27s_bloodline?oldid=214611"
Community content is available under CC-BY-SA unless otherwise noted.