“We can't run. Eyghon will find us. This mark might as well be a homing beacon.”
―Ethan Rayne[src]

The Mark of Eyghon was a ritual mark associated with Eyghon the Sleepwalker and worn by his initiates.

Those tattooed with it shared a psychic link with Eyghon, allowing him the demon to track them, and others bearing the mark. The proximity of Eyghon caused the mark bearers to experience flash-like visions when sleeping. A mundane laser removal was enough to cease the connection, as Buffy Summers did when Ethan Rayne tattooed on her without her consent.[1]

The Mark on Philip's corpse

Giles bears the Mark on his arm

Ethan with the Mark on this arm

Buffy has the Mark tattooed on her back

Diedre has the Mark tattooed on her forearm 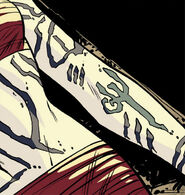 The Mark on Marianne's corpse
Add a photo to this gallery

Retrieved from "https://buffy.fandom.com/wiki/Mark_of_Eyghon?oldid=218390"
Community content is available under CC-BY-SA unless otherwise noted.