“Your one-stop spot to shop for all your occult needs.”
―Magic Box logo[src]

Magic Box, previously known as Uncle Bob's Magic Cabinet, was a magic shop located on Maple Court in Sunnydale, beside Book Stew!. The shop went through a series of owners, last owned and operated by Rupert Giles, when the place served as the primary headquarters for the Scooby Gang.

By 1998, the shop was owned by an unidentified woman, when she was killed by Spike in his search for a love spell.[1] In 1999, the shop was known as Uncle Bob's Magic Cabinet. At the time, Willow Rosenberg was able to wake up the owner in order to shop supplies for a protection spell.[2] Mr. Bogarty was killed by the Harmony Gang in 2000, also robbing a book on Slayers and an unicorn statue.[3]

Rupert Giles bought the shop after the death of a previous owner. Soon after opening, Anya Jenkins became a full time employee after demonstrating her excessive knowledge of mystical artifacts and business management.[4] The Magic Box operated as the Scoobies' headquarters, succeeding Rupert Giles' apartment and the Sunnydale High School library.

When Giles went away to England for a week, Anya and Willow were made in charge of the shop. Willow used the shop's supplies to her advantage when she tried to create a simulated sunlight spell. Though, her arguing with Anya messed up the ritual, conjuring a troll in the process.[5] Anya became the Magic Box's co-owner before Giles returned to England.[6] For a brief period, Buffy Summers also worked part time for the magic shop,[7] but found that she was not cut out for such employment.[8]

A training room for Buffy and Giles's sessions was placed in an unused space towards the back of the building. The Magic Box also contained a trapdoor which led to the sewers.[9] The Magic Box's phone number was (805) 555-8966.[10] The business hours were 10am to 9pm during Monday through Thursday, 10am to 12pm on Friday and Saturday, while closed on Sundays.[11]

The Magic Box was damaged and abandoned[12] in 2001, when Willow, corrupted by grief and magic, fought with Buffy and Giles within it, after draining the magic from its collection of dark magic books.[13] The building was finally destroyed in 2003, along with all Sunnydale.[14]

The following merchandise was available for sale at the Magic Box:

A wide variety of other magical paraphernalia was also available, including candles, incense, runic artifacts, potions, death charms etc., along with presumably non-magical items such as history books, jewelry, lollipops for children etc.

The store holds a large number of artifacts and books that are very dangerous, very dark or a combination of both. It included books on resurrection spells, as well as the "Darkest Magick", which contains powerful dark magic and was used by Willow in combination with a dagger also stored there. 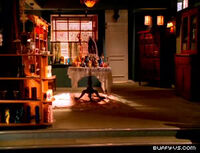 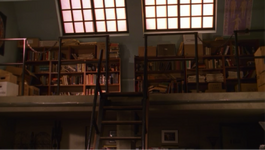 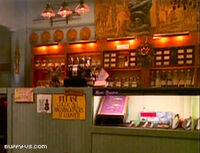 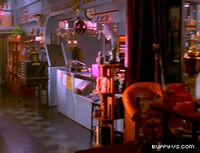 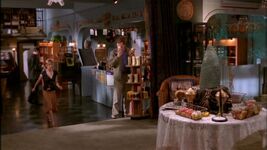 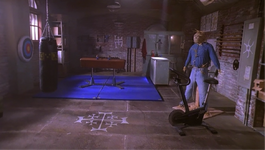 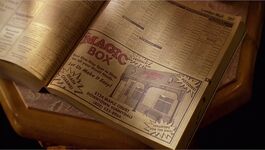 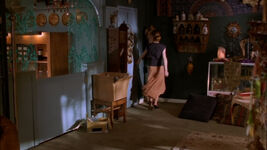 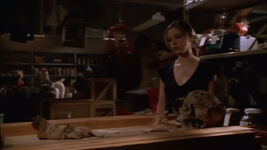 Basement/storage room.
Add a photo to this gallery

Retrieved from "https://buffy.fandom.com/wiki/Magic_Box?oldid=213209"
Community content is available under CC-BY-SA unless otherwise noted.