Lyle Gorch was a vampire, the brother of Tector Gorch and the husband of Candy Gorch.

Before he was sired, Lyle and his brother were murderers, coming from Abilene, known for their extreme brutality, such as massacring an entire Mexican village in 1886. According to Lyle, their mother abandon them in their childhood and he educated himself and his brother. At a certain point without explanation, the vampire brothers meet Angelus (recognizing him when they spy the Slayer kissing him in a cemetery and apparently shocked to discover that he was not anymore the famous evil vampire).

In 1998, Lyle and Tector arrived to Sunnydale. When seducing a young woman at the local mall, Lyle crossed paths with the Slayer Buffy Summers. After a brief fight, Lyle fled before she could stake him. Lyle and his brother then relocated into the sewers where they fed exclusively on rats in order not to draw attention to themselves. Lyle and Tector then attacked Buffy at her school while its student body, faculty and Buffy's mother were possessed by the Bezoar. Lyle then became enraged when the Bezoar devoured Tector, inexplicably blaming Buffy for his brother's demise. While fighting Buffy, he also fought off some of the attacking students. After witnessing Buffy kill the Bezoar and emerge covered in its blood and guts, Lyle then fled the scene out of fear.

At some point in 1998, Lyle married fellow vampire Candy. The two spent their honeymoon money to participate in "SlayerFest '98", traveling to Sunnydale months after his encounter with the Slayer in order to kill Buffy and Faith Lehane  as to avenge his brother. Despite lacking any weapons or preparation as the other contestants did, Lyle devised a plan. He and Candy broke into the Sunnydale High library, knocked out Buffy's Watcher Rupert Giles and waited for the Slayers to come for their Watcher in hopes of ambushing them with Buffy's own weapons. After Candy was staked by Buffy, Lyle threatened her until Cordelia Chase (who had been mistaken for Faith) stood up to him and claimed to be a superior Slayer to Buffy. Because of his "fight or flight" personality and not knowing that Cordelia wasn't actually a Slayer, Lyle fled Sunnydale, once again. 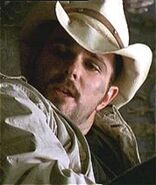