"Lovers Walk" is the eighth episode of the third season of Buffy the Vampire Slayer television show, and is the forty-second episode in the series. It was written by Dan Vebber and directed by David Semel. It originally broadcast on November 24, 1998 on The WB network.

SPIKE'S BACK — Just as Buffy enjoys a minute to revel in her S.A.T. scores and ponder her bright future, the underworld version of Sid Vicious, Spike, returns to Sunnydale a fallen man, a pathetic shell of his former self who has been left in the dust by his love Drusilla and is back to punish every one who is to blame, especially Angel. Meanwhile, Willow prepares a de-lusting spell to keep her and Xander's hormones in check during a double bowling date with Cordelia and Oz.[1]

At Sunnydale High School, Willow complains about receiving a 740 on Verbal for her SATs, while Xander notes that her verbal score closely resembles his combined score. Buffy shows up looking shaken; her unexpected SAT score of 1430 has opened up the possibility of a normal life, so she is unsure how to proceed.

That night, Spike drives through the "Welcome to Sunnydale" sign then he falls out drunk of the car, saying "Home sweet home" before passing out. At the old burned down Bric & Broc factory, he begins to shout and cry, destroying Drusilla's charred dolls and drunkenly wondering why she left him.

At school the next day, Xander persuades Cordelia to go on a double bowling date with Willow and Oz. Oz presents Willow with a witch-themed Pez dispenser, and she is both delighted by the thoughtful gift.

Giles, packing for a retreat, is delighted when he is presented with Buffy's SAT scores. Giles suggests that she has an opportunity to have a first-rate educational experience, being able to leave Sunnydale and her Slayer duties to Faith. He warns her about seeing Angel, so she promises that nothing will happen between them because they're just friends.

Meanwhile, Xander and Willow are second-guessing the bowling date with Oz and Cordelia. Willow is concerned that Oz and Cordelia will notice the attraction between her and Xander, as she resists Xander's attempt to kiss her earlobe. She and Xander restate their commitment to avoid physical intimacy with each other. Xander tells her that he wishes that they could just get rid of their feelings of lust.

That night, Spike stands outside the Crawford Street mansion and drunkenly rails at Angel for turning Dru against him, until he passes out in the garden. The next morning, he wakes to find his hand aflame under sunlight. He runs around trying to douse his hand and avoid the rising sun, eventually diving into his car to tend to his wound. He first pours alcohol on his hand, then pours some more down his throat to ease the pain. Surveying his current state, he notes: "This is just too much."

Back at home, Joyce Summers continues to push the idea of college for Buffy. Buffy is resistant, so Joyce asks her what could possibly be keeping her in Sunnydale. Buffy then visits Angel in the mansion and asks his opinion on her future options, in the process trying to determine where the two of them stand with each other. Angel suggests her as a friend to go, reasoning that it is a good opportunity for her to live a life outside of her calling. Buffy leaves.

Spike sneaks into the back of Uncle Bob's Magic Cabinet shop during the day in search of a curse for Angel. He tells the clerk he wants something really nasty, like boils or leprosy, something that would "make his parts fall off." The woman then turns to attend Willow, who is looking for ingredients for a "de-lusting" spell. As she and the clerk discuss ingredients, Spike, out of their sight, pays close attention; when Willow leaves, Spike kills the shopkeeper, having decided that a love spell for Drusilla would be "an even better idea."

Later that day, Mayor Wilkins is practicing golf putting in his office, when his deputy Allan Finch alerts him to their "Spike problem." The deputy suggests that Mr. Trick organize and send a "committee" to deal with the problem, the Mayor, after a few asides ranging from offering the deputy's soul for "one good short game" to whether "allowing a loose cannon to rock the boat" is a mixed metaphor, good-humoredly agrees.

At school, the night of the double date, Willow is in the chemistry lab, working on the ingredients for her anti-love spell. Xander shows up and they begin arguing when he figures out what Willow is doing. Spike comes in, still very drunk, and attacks Xander, announcing that he needs to borrow Willow for a while. Spike takes Xander, unconscious from a head wound, and Willow back to the factory, where he locks them up. Spike explains his situation to Willow, first threatening her life if she fails to cast an effective spell. He then sits next to her and tells Willow that Dru had thought he had gone soft after his alliance with Buffy and was not "demon enough" for her anymore. The final blow had come when he caught Dru cheating on him with a chaos demon and she told him that they could still be friends. Willow tries to half-heartedly comfort the distraught Spike. She then tells him that she doesn't have enough ingredients, so he takes her list and goes to collect what she needs.

At the library, Buffy is working out when Cordelia and Oz show up, worried because the lab is torn up and Willow and Xander are gone. Buffy's mom calls her, then Buffy hears over the line Spike say "Hello Joyce." Joyce offers him hot chocolate and advice, while he relates the details of his breakup with Dru and asks if she has any of "those little marshmallows." Outside, Angel spots them talking in the kitchen, but cannot enter the house because he is not invited. Joyce backs away accusing him of being evil, while Spike taunts him. Buffy suddenly arrives, pins Spike to the table, and invites Angel in. Spike tells them he's got her friends, so the three of them should leave to get the supplies for the love spell to be cast, then he'd set Buffy's friends free. On the way to the shop, Spike is afflicted with pain from finally starting to sober up and reminisces on memories of Drusilla. Buffy offers to stake Spike to put him out of his misery, but Angel tells her that they still need him to find her friends; Buffy counters that he probably just locked them in the factory, despite Spike's protests that he is not that "thick."

As Oz and Cordelia are driving, Oz catches Willow's scent, "a residual werewolf thing," and can tell that she is afraid. Cordelia declares it to be creepy, and Oz admits that he agrees.

Spike, Buffy, and Angel are getting the supplies. Angel comments that he's going to a lot of trouble for the sake of the fickle Drusilla, so Spike takes a swing at him before blaming the two of them for their break-up. Spike says that he is "nothing without her," which Buffy agrees, calling him pathetic. Spike retorts by saying that they sicken him; the last time he had seen them, they were fighting to the death, but now they were acting as if nothing had happened. They insist that they are just friends now, but Spike tells them: "You'll fight, and you'll shag, and you'll hate each other till it makes you quiver, but you'll never be friends. I may be love's bitch, but at least I'm man enough to admit it."

Xander wakes up to find that he and Willow are locked in the basement of the factory. They discuss what will happen to them: Willow explains that either she casts the spell and Spike kills them, or she refuses to cast the spell and Spike kills them. Xander demands a third option, so Willow suggests that Spike might have gotten so drunk that he will pass out and forget about them, leaving them to starve to death; she notes that this last possibility is their best option. Deciding that the high probability of death is a mitigating factor, Willow and Xander kiss, just in time for Oz and Cordelia to find them. Cordelia is horrified and runs up the stairs, but they collapse and she falls through, impaling herself on a piece of metal rebar sticking out of the rubble-covered floor below.

As Buffy, Angel, and Spike leave with the supplies, they are surrounded by a group of Mr. Trick's vampires, led by one of Spike's former lackeys, Lenny. Spike points out that if Buffy and Angel leave him to die, then Willow and Xander die too. Buffy reluctantly joins the brawl. After killing a few, they retreat back into the shop and barricade themselves in, fighting the vampires who get inside. Lenny insults Spike, making him beat and stake him in response. Eventually, Angel and Buffy use bottled holy water to scare off the remaining vampires. Spike, inspired and refreshed by the thrill of the fight, realizes that the only way he is going to get Dru back is if he becomes the man he once was, the man she loved. He tells Angel and Buffy that their friends are at the factory and that he is going to "find Dru, tie her up, and torture her until she likes [him] again." As he leaves the shop, he sticks his head back in to note: "Love's a funny thing."

Cordelia survives the fall; none of her vital organs are hurt. When Xander brings flowers to Cordelia in the hospital, she tells him to stay away from her. Willow tells Buffy that Oz refuses to talk to her, and Buffy suggests time, patience, and groveling. Buffy visits Angel and tells him that they are not friends; she explains that she is not coming back, because he does not need her help anymore, and she cannot maintain the lie about their friendship to herself — "or Spike, for some reason." Angel protests, but Buffy tells him that the only way they can see each other is if he tells her that he does not love her, something he cannot do.

Buffy, Angel, Cordelia, Xander, Willow, and Oz broods in their own way, mourning for their broken relationships. Meanwhile, Spike is back on the road, smoking and singing along with the music on the radio, as his car travels along the desert highway. 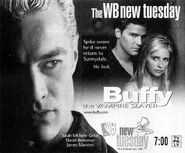 "Spike swore he'd never return to Sunnydale. He lied."
Add a photo to this gallery

Retrieved from "https://buffy.fandom.com/wiki/Lovers_Walk?oldid=234626"
Community content is available under CC-BY-SA unless otherwise noted.