The Origin, Part One

“Don't you understand? I've killed dozens of Slayers. Your life is not a blink of my eye, not a single breath. I have lived in the shadows, in the pulsing filth behind men's eyes. I have conversed with the worms that fed on my corpse and I have bathed in the blood of emperors.”
―Lothos[src]

Lothos was a vampire master and the first significant enemy of the Slayer Buffy Summers.

Lothos was a vampire allegedly around eight centuries old who had been responsible for the deaths of dozens of Slayers. Three Slayers known to had died in his hands were a barmaid and a noblewoman in the Dark Ages, as well as a prostitute in the 18th century.[1]

Having tracked the latest Slayer of 1996 — the newly-called Buffy Summers —, he attempted to sire her Watcher, Merrick Jamison-Smythe, to learn who she was or even kill her, but Merrick shot himself first to avoid risking her life.[2] Although, one of Lothos's new subjects was a classmate of Buffy's, and was thus able to direct Lothos to the gym where Buffy's school dance was taking place.

In a final confrontation outside the gym, Buffy torched Lothos by tricking him into touching a cross — subsequently using her hairspray as a makeshift flamethrower — and then staking him, proclaiming his defeat as being both for Merrick and for the girl she’d been before becoming the Slayer.[3]

Lothos was a powerful vampire, having killed numerous Slayers throughout his unlife. His age granted him physical abilities superior to other vampires. Lothos also possessed the power of hypnosis, which he used to paralyze Buffy; this made her pause for a few seconds before she was somehow able to overcome his power, something one had never done before. 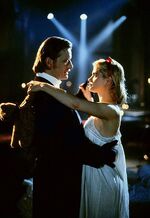 Retrieved from "https://buffy.fandom.com/wiki/Lothos?oldid=214268"
Community content is available under CC-BY-SA unless otherwise noted.