"Listening to Fear" is the ninth episode of the fifth season of Buffy the Vampire Slayer and the eighty-seventh episode in the series. Written by Rebecca Rand Kirshner and directed by David Solomon, it originally broadcast on November 28, 2000 on The WB network.

SOMETHING FROM ANOTHER PLANET TARGETS BUFFY'S MOM — As Buffy and Dawn help their mother prepare for brain surgery, a creepy extra-terrestrial demon becomes fixated on an increasingly disoriented Joyce and infiltrates the Summers' home.[1]

The Summers women are at Sunnydale Memorial when Dr. Aaron Kriegel informs Joyce she'll have surgery in two days. The rest of the gang does their best to patrol, hoping to prevent Buffy from being unnecessarily bothered while she is dealing with her mom's health. Meanwhile, Riley allows another vampire to feed from him.

The next day, Willow brings gifts to Joyce, Buffy, and Dawn in hopes of cheering them up. She brings Joyce a beer helmet, Dawn a book on the history of spells, and Buffy a history book and a yo-yo. With the brain tumor, Joyce has unusual outbursts, and the girls decide to let Joyce rest. On the way out, a mental patient sees Dawn and insists that there is nothing inside her.

Willow and Tara camp out on the roof of a building and watch the stars. Willow points out constellations to Tara, who points out several that she has made up. They cuddle and invent new star constellations when they see a large object streaking through the sky and crashing down in Sunnydale. They investigate the crash site and decide to contact the other Scoobies. The crazy man that spoke to Dawn, who has been released from the hospital, is walking through the forest when a creature attacks him and kills him.

At the hospital, the creature climbs along the ceiling, undetected. Buffy and Joyce talk the doctor into letting a highly agitated Joyce go home until her operation. The gang finds the location of the crash and a hollowed-out shell. They spread out the search and find the dead body of the mental patient. The gang leaves to do research, and Riley stays behind to investigate the scene. He calls Graham for military reinforcements and advises the soldiers how to deal with the situation when they arrive. They decide to try and track the creature by trace radiation.

At the hospital, a mental patient is attacked by the demon. Buffy's mom continues to act strangely and say things she doesn't mean to say. Dawn is hurt when Joyce calls her a "thing", but Buffy comforts her and tells her to ignore the things that people say when they are crazy. She tries to explain that when people are crazy, they think that nothing except themselves are real.

Through research, the gang finds that the creature is a Queller demon and that it is periodically summoned to rid the world of plagues of crazy people. At the Summers' home, Buffy and Dawn put their mother, whose mental clarity continues to deteriorate, to bed. Dawn listens from her bedroom as Joyce babbles loudly. At first, she appears to be talking to the ceiling; however, it is soon revealed that she is talking to the Queller demon, which is watching her from the ceiling. Dawn tries to ignore the babble, and Buffy, who is downstairs washing dishes, turns on loud music and begins to sob.

In Joyce's room, the demon falls from the ceiling and spits a thick layer of slime onto Joyce's face. Dawn hears the commotion and runs to check on her mother. When she sees the demon attacking her mother, she comes to the rescue, knocking it onto the floor with a coat rack. It flees from the room, and Dawn slams all the doors and screams for Buffy. Buffy runs upstairs to check on her mother and sister. They tell her about the demon, and she chases it downstairs where she finds Spike coming out of her basement. He asks her if she heard a noise, and she notices that he has been stealing pictures of her, but the demon attacks before she has a chance to berate him.

Together, they fight off the demon, and Buffy ultimately kills it with a knife while wrestling with it on the floor. Spike walks over and offers his hand to help her up. He pulls her to her feet, and their hands remain connected as Riley bursts through the door with the soldiers. Spike informed Riley that he had missed quite a show, making sure that Riley understood that Spike had been there to help.

Back at the hospital, Ben gets into his car to find that Dreg is waiting in the backseat. Ben reveals that he is the one who summoned the Queller, intending to handle the town's expanding mentally ill population, which he describes as "having to clean up Glory's mess," which he complains he has "had to do" for his entire life.

In her hospital bed, Joyce has realized the truth about Dawn during her brief experience with insanity, which Buffy confirms for her. Joyce insists that Dawn is nevertheless her daughter, and urges Buffy to take care of Dawn in case anything goes wrong during the operation. While her daughters and the rest of the Scoobies watch on, Joyce is wheeled off to surgery. 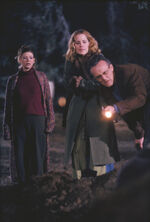 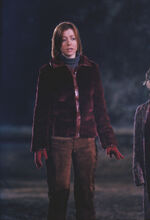 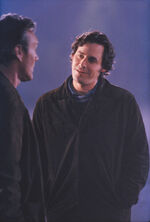 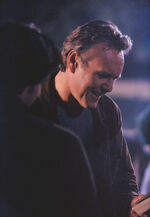 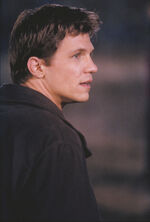 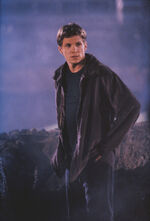 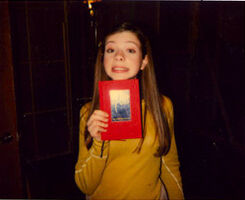