Lies My Parents Told Me

Lies My Parents Told Me

"Lies My Parents Told Me" is the seventeenth episode of the seventh season of Buffy the Vampire Slayer and the 139th episode in the series. Written by David Fury with Drew Goddard and directed by David Fury, it originally broadcast on March 25, 2003 on the UPN network.

WAITING FOR MY MOMENT — Giles returns to Sunnydale with a possible solution to the trigger in Spike used by the First. Unfortunately, Spike is not overly willing to revisit his memories in order to find the trigger's origin and why it affects him so much, leaving Giles and Wood to come up with an alternative plan of their own. While Giles distracts Buffy, Wood takes on Spike and prepares to revenge the death of his mother.[1]

New York, July, 1977: Spike is fighting Nikki Wood in Central Park at night in pouring rain while her son watches from his hiding place behind a bench. Spike has the opportunity to kill her but the kid distracts him and he lets her go with the promise that they'll meet again. "Love the coat," he adds before he leaves. When he's gone, Nikki finds her son and tells him he's taking him to Crowley. Robin says he wants to stay with her, so Nikki calms his fears by telling him: "The mission is what matters."

In an alley in present-day Sunnydale, Buffy, Robin Wood, and Spike are fighting a group of vampires. Buffy and Spike manage to kill their quarry, but a vampire has knocked Wood to the ground, and is about to kill him. Spike saves Wood by staking the vampire from behind, then helps him up. Wood thanks him, while blood drips from his hand as he tightly holds a stake.

In Sunnydale High School, Buffy, Giles, and Robin discuss what they know about Spike's trigger. The First Evil had programmed Spike with a post-hypnotic suggestion in his mind that allows it to turn Spike violent using an old song as a trigger. This way, the First was able to command him to kill again. Buffy wants to find out how to turn it off so that she can fully count on Spike against the First, but Giles opposes it. In his opinion, Spike is dangerous and must be contained.

With all that happening, the Scoobies go to the basement in Buffy's home, where Willow performs a spell with the Prokaryote Stone, a magical artifact that penetrates Spike's mind and makes him more conscious of how the trigger works. In this way, he relives his past, his sick mother, and how he turned her into a vampire only to be rejected by her newly vampiric self. The song that his mother used to sing makes him relive the whole episode and violently lose control. He unwillingly hurts Dawn in the process and scares them all, except Buffy. Meanwhile, Willow receives a phone call from someone named Fred and leaves for Los Angeles. She apologizes to Buffy for her quick departure, but promises to be back as soon as she can, and she may even return with good news.

Wood privately convinces Giles that Spike must die. Giles learns that Wood is the son of the Slayer Nikki, and that Spike murdered her. After a brief chat, they make a plan: Giles is to distract Buffy while Wood takes care of Spike. Giles takes Buffy on patrol and begins asking her indirect questions and making obscure references to her role against the First. In the meantime, Wood takes Spike to his garage with the promise to protect him, but, as soon as they enter, Spike notices its walls are covered with crosses. Wood reveals to Spike that he knows he murdered his mother and that he's going to kill the monster inside him. Spike says he has no remorse over killing his mother, and that it was "all part of the game." Wood then goes to his computer and starts the old song that triggers Spike, allowing them to begin their fight.

As the fight progresses, Spike continues to relive the events that transpired between himself and his mother. Wood takes advantage of Spike's flashbacks, and, using weapons, knocks Spike around until he cannot stand, when he then attempts to stake him. Spike regains control of his own mind, having faced his own anger and regret on turning his mother into a vampire and then being forced to kill her. Spike then easily defeats Wood, and demonstrates that the trigger has been broken and the song has no more power over him. He tells Wood that the difference between his mother and Wood's is that Spike's mother actually loved him back, while Nikki did not love him enough to give up her Slayer duties. Spike then tells Wood that he's going to kill him and moves to bite him.

Meanwhile, Buffy and Giles use the cemetery to engage in some back-to-basics Slayer/Watcher instruction. Buffy fights a fledgling vampire named Richard, who she could easily kill, but Giles asks her not to. When Giles talks about having to make hard decisions about who lives or dies, Buffy realizes that Giles is trying to distract from Spike. She slays Richard, leaves Giles, and rushes to Wood's place. Buffy finds Spike just leaving Wood's workroom. Wood is badly beaten, but alive. Spike informs him that he spared Wood because he owed him for killing Nikki, but makes it clear that he will kill Wood without a second thought if he so much as looks at him the wrong way again. Buffy goes inside, and tells him that she needs Spike alive and that she has no time for personal vendettas. She promises him that if he tries anything like this again, she'll let Spike kill him. As Buffy leaves, she adds: "The mission is what matters."

Once at home, Buffy tells Giles that his and Wood's plan failed. In spite of that, he tries to pick up from where they left off earlier, and continue the interrupted lesson. But Buffy, hurt over his betrayal, makes it clear she has no intention of learning anything else from him.

Spike: "It's still me Mother. Your William. Though Dru here seems determined to give me a pet name..."
Drusilla: "Yes. Like Willy. Or Bill. Or Lucien, Prince of Lies."

Giles: "Yes, and The First seems to be exploiting it to his advantage."
Buffy: "Exactly. The First's doing this. Spike's innocent."
Giles: "So was Ben."
Buffy: (Buffy stops cold. The vamp launches at her and she whip-stakes him to dust.) "Ben?"
Giles: "He was a human being, after all. Forced, his whole life, to share his mortal form with a demi-god from a hell-dimension."
Buffy: "Glory. I know. What does that have to do—"
Giles: "Ben was oblivious to the atrocities Glory committed. No more responsible for her crimes than Spike is to his, when triggered. Glory was invincible, impossible to kill... Ben was not. So after you defeated her. After you left Ben lying there. Alive. I made a decision. One that you couldn't."
Buffy: "Giles..."
Giles: "I put my hand over his mouth. And as he struggled, weakly... I smothered him. Because it had to be done." (looks at Buffy) "He was a liability."
Buffy: "Oh god... You've been stalling me. Keeping me away—" 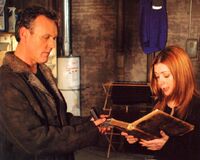 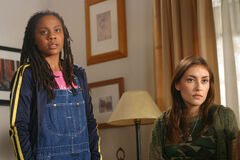 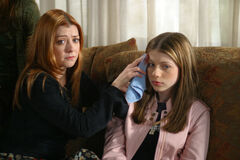 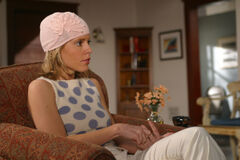 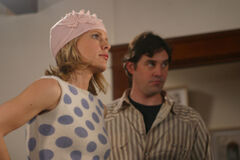 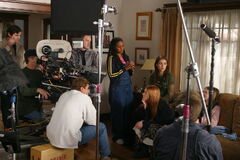 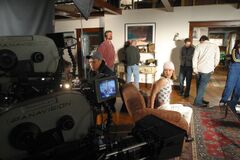 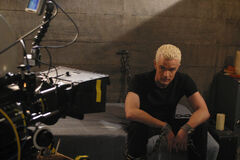