"Lie to Me" is the seventh episode of the second season of Buffy the Vampire Slayer television show, and the nineteenth episode in the series. Written and directed by Joss Whedon, it originally broadcast on November 3, 1997 on The WB network.

LOVE OR LIES — Buffy's fifth grade flame, Billy "Ford" Fordham, unexpectedly arrives in Sunnydale with one motive: to deliver Buffy to Spike in exchange for the immortal life of a vampire. Meanwhile, Buffy and Angel confront their feelings for each other and Angel owns up to his past relationship with Drusilla.[1]

Drusilla approaches James, a little boy waiting for his mom in a playground. Angel arrives sends the boy home, realizing that if Drusilla and Spike remain in Sunnydale, a fight with them is inevitable. He tries to persuade Drusilla to leave town with Spike, to no avail. Buffy sees them from a distance while they talk, sparking her curiosity and her jealousy.

The next day, Ms. Calendar is teasing Giles about their date, which she is planning but won't give him any details on. Buffy reports her patrolling but omits any Angel references. Later in class, she passes notes to Willow about the Angel–Drusilla sighting. In the hallways, Xander tries to make his way into the conversation but fails, just as another young man sneaks up behind Buffy and surprises her. She introduces him to Willow and Xander as her friend Billy Fordham from Los Angeles, with whom she attended school for 7 years. He explains that his dad has been transferred and he's finishing his senior year at Sunnydale High. They make plans to go to the Bronze that night before Buffy walks Ford to the Admissions Office.

That night at the Bronze, Ford entertains Willow and Xander with embarrassing stories about Buffy, claiming to know all her darkest secrets. While getting drinks, Buffy runs into Angel. She asks what he did the previous night, to which he answers lying that he stayed in and read. She introduces Angel to Ford, whom Angel doesn't trust from the beginning. Buffy ask Ford to take a walk with her and she says goodbye to her friend. As the two walk out, Angel is confused as to what he's done to make her angry.

In the alley behind the Bronze, Buffy hears suspicious clattering around a corner. She asks Ford to go back and get her purse and then runs around toward the sound. Ford heads toward the Bronze just for a second before turning back and following Buffy, where he watches her stake a vampire. She makes up a story about cats but Ford reveals that he knows that she is the Slayer, having found out shortly before she was expelled from Hemery High.

Later that night, Buffy and Willow are discussing the incident on the phone. Meanwhile, Ford walks into an industrial building. The door opens to a platform with stairs leading down to a large room, a club full of teenagers dressed in Gothic styles, listening to industrial music. Ford walks down the stairs and begins discussing some event with his friend Marvin aka Diego, who is upset about not knowing the details of the plan. In the background the 1974 version of Dracula is playing on several monitors, and Ford quotes some of its lines.

In the same night, Angel shows up on the balcony to Willow's bedroom. She invites him while explaining that she isn't supposed to have boys in her room. He asks for help tracking down Ford on the Internet. Willow indirectly accuses him of being jealous, which he partially admits but insists that he knows Ford is trouble regardless. She quickly finds that Ford is not actually registered at Sunnydale High. Angel has to leave before her mom finds him, but Willow agrees to keep searching and to not tell Buffy what they are doing.

The next day at school, Willow is awkward and jittery when she runs into Buffy and Ford, but Buffy attributes it to coffee when Willow runs away. Buffy and Ford run into Giles who makes up a reason for giving Buffy the pager number of Ms. Calendar in case she needs to reach him, prompting Buffy to tell Giles that Ford knows about her secret. He accuses her of using her identity to impress boys, but she explains that Ford already knew.

That night, Buffy gives Ford a tour of Sunnydale, which brings them back to the school. While they are discussing how dull a place it is, they see two vampires run onto campus. They follow the vamps, but one gets behind Buffy and attacks before she sees him. Buffy and Ford get separated in the scuffle, each one taking one of the creatures. Ford pins his vampire to the ground, telling her that he'll let her go if she tells him what he wants to know. After killing her vamp, Buffy finds Ford, who is now alone, asks where the other one went. Ford claims that he has killed it and it turned to dust.

Meanwhile, Xander, Willow, and Angel visit the industrial building used by Ford and his friends, whose address Willow found associated with his name online. Claiming to be friends of Ford's, they are let in the Sunset Club and see the strange cult living there. They notice a pro-vampire motif just before a girl named Chanterelle starts a conversation with them about those she calls the "lonely ones". She explains that they are elevated, misunderstood creatures, but Angel scoff at her beliefs. She is offended and walks away. Angel claims to have seen cults like this before, and that they don't know anything about how real vampires live or dress. At that moment, a teenager dressed just like him walks by. Ranting on their way out, they are overheard by Diego.

Buffy goes back to the library and meets Giles, who is not too upset about the interruption of his mystery date with Ms. Calendar that turned out to be monster trucks. They try to think about what the vampires could have been up to when Buffy sees a picture of Drusilla among Giles' research things. She recognizes it as the girl with whom she saw Angel two days before, and asks who she is. Giles explains that she was Spike's lover, allegedly killed by an angry mob in Prague, but Buffy tells him that she is still alive and that she saw her with Angel. While they are discussing what Drusilla's meeting with Angel could mean, a vampire storms out of Giles' study with a book. She sprints for the door and makes it before anyone can stop her. Buffy recognizes her as the vampire Ford said he had dusted.

At that moment, Spike and Drusilla are in the Bric & Broc factory also discussing her meeting with Angel, but are interrupted when Ford sneaks in. After annoying Spike with horror movie clichés, Ford asks to be made a vampire, but the idea doesn't interest Spike until Ford explains that he can give them the Slayer.

Later that night, Angel comes to Buffy's house to tell her about Ford's group, but she starts interrogating him about Drusilla before he can explain about Ford. Buffy demands the truth about her and her relationship with Angel. He explains that Drusilla was the worst of all the terrible things he did as a vampire. He is Drusilla's sire, but before making her a vampire he took his time in torturing her into insanity by killing everyone she loved and subjecting her to every cruelty he could think of. She fled to a convent but he followed her and killed her the day she took her Holy Orders. Buffy is visibly upset, but accepts it. He tells her about the vampire cult Ford is in, but that he doesn't know their plans. She is upset that he, Willow, and Xander were doing reconnaissance behind her back.

At school the next morning, Ford asks Buffy to hang out again, but won't tell her what he has planned. Buffy agrees to meet him at 9. However, she doesn't wait to meet Ford as planned and goes to his club a little after six o'clock. While Ford is explaining to his followers that they will all be changed tonight, Buffy comes in and tells him his plan isn't going to work. Someone closes and locks the door behind her, as Ford explains that it can only be opened from the outside and he was counting on Buffy figuring out his plan and coming to meet him. Ford's alarm beeps at 6:27 — sunset — as Buffy pleads with him to let the others go. She explains that becoming a vampire means you die and a demon takes up your body and memories. Ford interrupts to tell her that he has brain cancer and will be dead in six months and believes it better to live forever as a vampire than to die riddled with tumors. He then admits to her that the other people will not be changed, they are just fodder. Though Buffy is moved by Ford's plight, she still cannot condone his actions.

Within minutes of sunset, the vampires arrive, led by Spike, and all of them move to begin feeding. With this, the shocked teens realize that the creatures that they had believed to be gentle and misunderstood are in fact violent, brutal, and murderous. Buffy starts fighting Ford but the scuffle doesn't last long. She swings him into a metal beam and he falls down, out cold. While the rest of the vampires are feeding, Drusilla waits on the platform above the main area of the room near the door. Buffy sees her alone, rushes through the crowd and jumps up to the platform, where she immediately grabs the vampire and holds a stake to her heart. Buffy yells out to Spike that he must stop or she'd dust his girlfriend. Spike orders everyone to stop feeding and, at Buffy's demand, lets everyone go. The teens flee and Buffy follows. Ford is still unconscious on the floor as Buffy closes the door, locking all the vampires inside with him. She tells Angel that they can come back later for "the body." Ford awakens and confronts Spike — the Slayer may have gotten away, but Ford held up his end of the bargain by handing her over. He demands that Spike holds up his end of the bargain and turn him.

A few nights later, Buffy and Giles stand over Ford's fresh grave, and Buffy lays flowers on it. Buffy is deep in thought about how to tell who is the enemy and who is not, and who to hate. She asks Giles if life ever gets easy, and Giles tells her she's growing up. Just then, Ford emerges as a vampire and Buffy quickly stakes it. Giles asks Buffy what she wants him to say. She responds: "Lie to me." He makes up a speech about the simple difference between right and wrong, bad guys and good, how the latter always win and everyone lives happily ever after. Buffy tells Giles: "Liar."

Angel: "Yeah, I eat too. Not for nutritional value – it just kind of passes the time."

Buffy: "Do they know about 'fun' in England?
Giles: "Yes, but it's considered very poor taste to have any." 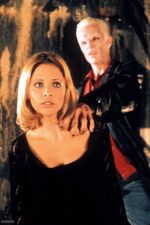 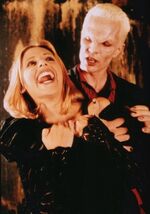 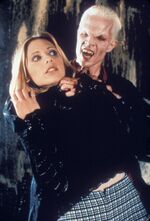 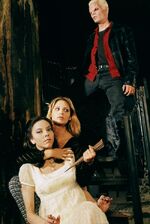 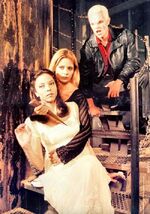 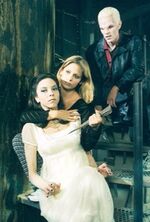 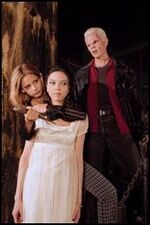 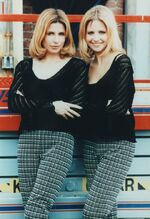 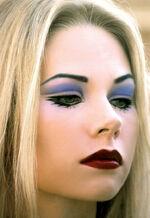 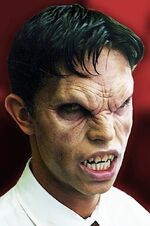 "A love from Buffy’s past has just one thing on his mind… her death."
Add a photo to this gallery

Retrieved from "https://buffy.fandom.com/wiki/Lie_to_Me?oldid=214360"
Community content is available under CC-BY-SA unless otherwise noted.