"Welcome to the Hellmouth"

"Bring on the Night"

Kristine Sutherland (born Kristine Young on April 17, 1955) is an American actress best known for her role as Joyce Summers in Buffy the Vampire Slayer.

Sutherland was born Kristine Young but changed her name after being confused with similarly named actresses. She was born in Idaho but attended the Tates Creek Drama Program in Lexington, Kentucky. After graduating, she enrolled in the University of Kentucky.

In 1997, she auditioned for the role of Joyce Summers in Buffy the Vampire Slayer. Creator Joss Whedon has said that she was given the role due to the warm demeanour she exuded as well as looking very similar to Sarah Michelle Gellar who would portray her daughter in the series. She appeared as a series regular until season 5, returning for 3 guest appearances: one in season 6 and two in season 7.

After leaving Buffy, Sutherland opted to take up still photography attending Santa Monica College; opening her own studio which focused on portraiture.

Sutherland is married to actor, John Pankow with whom she has one daughter. 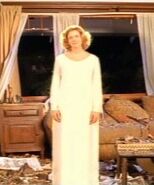 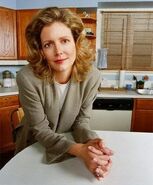 Retrieved from "https://buffy.fandom.com/wiki/Kristine_Sutherland?oldid=204207"
Community content is available under CC-BY-SA unless otherwise noted.