"Killed by Death" is the eighteenth episode of season two of the television show Buffy the Vampire Slayer, and the thirtieth episode in the series. Written by Rob Des Hotel and Dean Batali, and directed by Deran Sarafian, it was originally broadcast on March 3, 1998 on The WB network.

After a flu lands Buffy in the hospital, she rescues fevered patients from Der Kindestod, a demon that sucks the life out of hospitalized children.

A flu-stricken Buffy, reluctant to stay at home, patrols the cemetery. Xander, Willow and Cordelia surprise her and she nearly stakes Xander. They try to convince her to go home, but the damage that Angelus has done so far continues to fuel her fire. Angelus appears behind her and attacks Cordelia. Buffy and Angelus fight until he pins Buffy down. Willow throws a coat over his head, and he is turned away by the three's crosses. Buffy faints and the gang rush her to the hospital. After being stabilized, she is admitted to the hospital for a few days against her will. Her mother reveals that Buffy has always hated hospitals ever since her cousin died in one while Buffy was in the room.

Joyce brings up the topic of Ms. Calendar's death to Giles, which he would much rather forget. Meanwhile, Xander, Willow, and Cordelia wait to protect a very sick Buffy from the harms of Angelus. That night, Buffy has a dream where she sees a small boy standing in her doorway. He leaves. A strange-looking man, not quite human, follows after him, glancing into Buffy's room as he goes. As she follows the man down the hall, she has flashbacks of her cousin Celia and her playing in her room when they were younger. During this time she's also remembering Cecilia's time spent in the hospital. She awakes suddenly in the middle of the night and takes a walk down the hall. Two men exit the children's ward with a child who had died that night. At the door she overhears a conversation between Dr. Backer and Dr. Wilkinson about the doctors' experimental treatments on the children and raising their temperature to dangerous levels. As she begins to leave, she encounters two children that tell her about "Death": he comes at night, and the grown-ups can't see him.

That night, Angelus comes to visit Buffy but Xander stands guard. They stand face to face and exchange threats with Angelus taunting Xander about how he's still in love with Buffy and how jealous he must be that Angelus got her first. Angelus says that Xander standing in his way wouldn't stop him from going into Buffy's room and Xander points out the guards, policemen, doctors, and orderlies. Angelus finally leaves, aggravated by the fact that he may not make it to Buffy's room with all the impediments in his way.

The next morning Dr. Wilkinson comes to check on how Buffy is doing. She comments on the fact that Buffy's wrist is no longer swollen and how fast she seemed to heal. Buffy, still anxious about being in the hospital, says that's great and that she can leave. Dr Wilkinson pushes her back into the bed just as Buffy's friends visit and tells them to try to keep Buffy from bolting. They come bearing gifts to cheer her up — Xander with balloons, Willow with Buffy's homework (that she finished for her) and grapes from Giles. Cordelia claims she was "out of the loop on gifts" and Giles points out that gifts for people in the hospital are common among 'humans'. They all take a walk and Buffy tells them about the conversation she overheard. Dr. Backer was trying experimental treatments on the kids in the children's ward, and Dr. Wilkinson doesn't agree with him.

Buffy says she thought she saw something too. However Cordelia asks if maybe Buffy is just creating a demon or something because she needs something to fight so she doesn't feel so powerless in the hospital. Buffy does say that she's not sure but since she is forced to stay at the hospital, she plans to find out what the doctor is up to, and Xander volunteers everyone's help. Cordelia and Xander sneak into the hospital's record room and search for records on the girl that died that night. Meanwhile, Giles and Willow search for information at the school library. While looking through the records, Cordelia is caught by the security guard. She flirts with him until Xander can escape with the records, then leaves herself. Xander expresses his jealousy towards her flirting with security guard and Cordelia expresses her anger about Xander's behavior around Buffy. She leaves to take the records to Giles, and Xander "watches her back" as she goes.

Buffy takes a walk and finds the little boy. He is drawing a picture of the man she saw in her dream. Willow digs up information on Dr. Backer at the library with Giles, and she finds that he has a large past of experimental treatments and investigations into his practices. Meanwhile, Dr. Backer is working on trying to cure the children's illnesses. After finding a solution that he thinks will work, he takes it to the children's ward to try it out. Before he can do anything, the invisible creature attacks him, slashing him up. Buffy tries to stop him but is thrown aside, unable to see the creature.

The next morning Buffy informs everyone that Dr. Backer is not the suspect, and shows them the drawing that Ryan drew of the creature. Joyce walks in with the good news that Buffy can go home, but Buffy insists she should stay a little longer. Confused, her mother leaves to tell the doctor. Xander, Giles, and Cordelia leave her alone and come up with a plan. Giles and Cordelia head back to the library while Xander stands guard in case Angelus shows up. At the library, after thoroughly annoying Giles, Cordelia closes the book she was looking through only to find a picture of the monster on the cover.

Later, Cordelia calls Buffy to tell her that the monster is called Der Kindestod and the name means child death. When Giles comes in with book of information on how it's kills, she starts squeamishly making half sentences, not really giving Buffy any information other then it's "ew". Cordelia drops the phone into Giles hand asking why she let them drag her into all these weird things. Giles takes over, telling Buffy that it sits atop his prey, pinning it down helplessly while it sucks the life slowly out of a child. Buffy flashes back to her time at the hospital as a child again, and she sees her cousin Celia screaming and fighting at something on top of her while she helplessly watches. Buffy goes silent over the phone and after a few moments, Willow takes it from her, thanks Giles, and hangs up. Buffy then realizes that Der Kindestod was also the killer of her cousin.

Buffy questions how she's going to fight the monster when she can't see it. Willow points out that she did see it once and Buffy realizes that it was her high fever that gave her the ability. The two head to Dr. Backer's office in search of answers. They find out that Dr. Backer was giving the children injections of the disease they already have in order to inoculate them. Dr. Backer was trying to do good after all. Buffy decides to induct herself with one of the vials the doctor was using on the children. Willow stops her, warning her that the liquid is 100% pure and would kill Buffy instantly if she drinks one. Willow then dilutes the medicine in some water so Buffy can drink it "safely".

Buffy's fever rushes up to a near 107 degrees as she stumbles to the children’s ward. She finds all the children are gone. They have headed down to the basement in hopes of escaping from Der Kindestod. After a few moments, Buffy's fever kicks in and she sees Der Kindestod in the children's room and watches as he heads down to the basement. The door is locked so Buffy and Willow rush to find access to the basement. Dr. Wilkinson tries to stop them, but Buffy shoves her aside. When security guards stop the two, Willow pretends to be insane, saying frogs are all over her as Buffy makes her escape. Dr. Wilkinson tells them they needed to stop the other girl not Willow.

Buffy works her way to Xander, and he helps her down to the basement. The children wait quietly in hopes of not being found, but then Der Kindestod picks up Ryan. He screams, along with all the other children and Der Kindestod tosses him to the floor. He climbs atop Ryan, two suckers coming out of his to settle over Ryan's eyes. Buffy arrives just in time, smacking the demon over the head with a board and fights off Der Kindestod. Just as his suckers come out of his eyes to cover hers, she snaps his neck, and leaves while leaning on Xander. Buffy finishes her rehabilitation at home with her friends. Her mother reluctantly waits on them all obviously getting frustrated at their demands. Joyce then hands Buffy a letter from Ryan, which is revealed to be a drawing of her hailing over a dead Kindestod, complete with copious amounts of blood. A clearly bemused Joyce simply states the drawing is "nice", while Buffy allows herself a triumphant smirk. 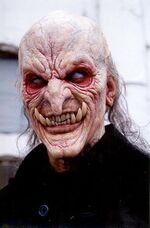 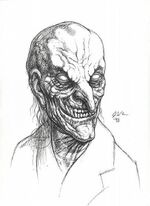 Concept art
Add a photo to this gallery

“Think hospitals are frightening? You have no idea…”
Add a photo to this gallery

Retrieved from "https://buffy.fandom.com/wiki/Killed_by_Death?oldid=235104"
Community content is available under CC-BY-SA unless otherwise noted.