Buffy the Vampire Slayer #9
This article is about the Kendra from the 2019 comic series. For the original counterpart, see Kendra Young.

Kendra Young was a Slayer called in 2019.

Kendra was identified as a Potential Slayer when she was two years old.[2] She never met her father, who she considered "some deadbeat whom didn't care about [her]."[3] Kendra was raised by "Aunt" Vea, who had been employed by the Watchers Council as her caretaker, and trained by the Watcher Sam Zabuto in Jamaica. She hated Zabuto's often critique, who would told her that smiling while slaying was a sign of weakness. Kendra also feared eventually having to leave her country when called, but Zabuto reprimanded Vea for telling her it might never happen.[2]

On October 28, 2019,[4] the Slayer Buffy Summers entered the hellmouth;[5] despite being alive, leaving the mortal plane caused the activation of a second Slayer.[6] Meanwhile, Kendra slayed a master vampire who had been preying on tourists; during the battle, he attempted to bite Kendra, but she staked him with Mr. Pointy. After escaping with her, Zabuto revealed that he saw Kendra as an impressive, strong, and amazing woman, then informed that she had been called and had to leave Jamaica.[2]

Kendra soon arrived in Sunnydale and sneaked into Robin Wood's home,[7] who had recently accepted joining the Council.[8] She recognized him as a Watcher[7] and demanded that he trained her, as the Watchers Council had sent her as his Slayer.[9]

While with Robin, Kendra saved Buffy's friends Rose Martinez and Cordelia Chase as they attempted to fight off Luke, a boy who attacked them as a result of the Hellmother's growing influence over the men of Sunnydale. After she announced herself as the new Slayer,[9] she sat down with Rose at the Tunaverse and explained to her about the existence of the supernatural.[3]

Robin, increasingly enraged by the Hellmother, left the two alone after criticized them for acting like they were on a date. Kendra went for a quick patrol on a cemetery, where she met Buffy's friends Willow and Xander, who she first attacked for being a vampire until she learned he had a soul. They were suddenly surrounded by the Hellmother's new army, but the demonic Anyanka arrived just in time to defend them from a possessed Robin.[3]

Kendra, Willow, and Xander followed Anya through Sunnydale's sewers, when Anya explained that Kendra's senses that something was divided was due to Buffy's survival, although banished in the hellmouth. Back inside the Tunaverse, they met with Rose and Cordelia and fought off the oncoming men. The group then flew off the place on the Camazotz[6] into the hellmouth, where they assisted Buffy in the fight against the Hellmother and an army of demons.[1] Kendra's entrance in the hellmouth caused a third Slayer to be called as well.[10] 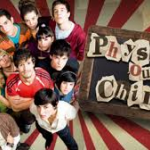