“You talk about slaying like it’s a job. It’s not. It’s who you are.”
―Kendra

Kendra Young was a Slayer from Jamaica activated in 1997 after Buffy Summers’ temporary death. Trained by her Watcher Sam Zabuto, Kendra was completely dedicated to her calling. She was an ally to the Scooby Gang in battling the vampires Spike and Drusilla, but was killed in 1998 by Drusilla after only a year-long tenure as Slayer.

Kendra Young’s parents gave her up for Slayer training at a very early age after she was identified as a Potential Slayer, under the guidance of the Watcher Sam Zabuto. Years later, she would claim she had no surname.

By the time of her activation, Kendra couldn’t even remember who her parents were but was allowed to see pictures of them. Zabuto was very strict with his charge, forbidding her from enjoying a social or romantic life, which he taught her would distract her from her duties as the Slayer. Kendra became fully versed in the Slayer Handbook and fighting techniques, and owned a trusty stake which she named Mr. Pointy.

After a lifetime of preparation, she was called in 1997 when Buffy Summers died at the hands of The Master; although Buffy’s friend Xander Harris managed to revive her with CPR, her death nevertheless activated a second Slayer, causing two to co-exist for the first time.[1][2][3]

In her first year as the Slayer, Zabuto sent Kendra to Sunnydale when signs indicated that a very dark power was about to rise there. Kendra arrived to Sunnydale via an airplane cargo hold, beating up one of the workers on the way. Arriving at the local ice-skating rink, she then saw the ensouled vampire Angel kissing Buffy, and mistakenly assumed that Buffy was also a vampire — the first of many quick conclusions she would draw. Kendra attacked Angel at Willy’s bar and locked him in a cage after a brief brawl, leaving him trapped in a position soon to be exposed by direct sunlight.

Kendra then moved on to Buffy and attacked her at Angel’s apartment where she was sleeping. After a short fight, they discovered that they were both Slayers and both decided to go to Buffy’s Watcher to clear the situation up.[1] It was there that Buffy learnt about her involvement in Kendra’s activation. Watcher Rupert Giles told them that two Slayers existing at the same time was unprecedented and suggested they work together to defeat the Order of Taraka, to which Buffy initially assumed Kendra belonged.

Kendra’s social isolation and dedication to discipline and technique contrasted sharply with Buffy’s independence; Buffy believed that her emotions and friendships made her a better Slayer. The two girls initially shared an antagonistic relationship, but they eventually began to empathize with each other’s lifestyle, and Kendra helped Buffy realize that being a Slayer was not a burden, but simply part of who she was.

Buffy’s friends, the Scooby Gang, learned that the dark power Zabuto detected was the vampire Drusilla, whose boyfriend Spike was planning to sacrifice Angel in order to restore Drusilla’s strength. Despite her reservations about saving a vampire, Kendra aided Buffy in the rescue of Angel from Spike and Drusilla where she witnessed the love they felt for each other. Kendra then departed from Sunnydale on friendly yet conditional terms (not willing to hug her goodbye) with Buffy, now using a plane ticket, taking a taxi and wearing one of Buffy’s shirts, as she had ripped her own while fighting Patrice. She also admitted that Angel was “pretty cute” despite being a vampire, and promised not to tell her Watcher about it.[2]

Kendra returned to Sunnydale in 1998 when her Watcher informed her that the demon Acathla would open its mouth and suck the world into a hell dimension (informed to her as “a very dark power is about to rise”). By that point, Angel had lost his soul, reverted to the infamous Angelus, and was the one destined to activate Acathla alongside Spike and Drusilla. Zabuto gave Kendra a special sword that was blessed by the knight who first slew Acathla. Zabuto and Kendra believed the sword could be the last hope in slaying the demon if he were to awake. Kendra passed the sword onto Buffy; their paths had crossed a second time when Kendra surprised Buffy during patrol.

Kendra took Xander Harris’ side when organizing their plan of attack and believed Angelus should be killed, but Buffy wanted Willow Rosenberg to attempt the Ritual of Restoration to restore Angel’s soul in case they were unable to eliminate him. When Angelus threatened to kill more people if Buffy didn’t confront him at the grave yard, Kendra wanted to join Buffy but she insisted she stay and help protect Willow during her attempt at restoring his soul. Just before Buffy left, Kendra gave Buffy her “lucky stake” Mr. Pointy.

Drusilla and her vampire lackeys soon arrived at the library to stop the attempt to bring back Angel and after a brief fight, Drusilla hypnotized Kendra and slit her throat, killing her.[3]

As Buffy was found next to Kendra’s body, she became a suspect for murder and was then expelled from Sunnydale High; later, Buffy had been cleared of all charges by eyewitness reports. Principal Snyder, who already antagonized Buffy with a passion, initially refused to allow her to return to school, citing her poor grades, spotty attendance record, and “tingling pleasure” that he was finally rid of her; however, he was eventually forced to do so thanks to the intervention of the school board, as well as physical and professional threats from Rupert Giles.

Buffy kept Kendra’s favorite stake with her[4] and mentioned using it in her slays.[5]

With Kendra’s death, Faith Lehane was activated as a new Slayer,[6] the last of the original line.[7]

Kendra possessed more textbook knowledge about slaying than Buffy. She obtained it from her rigorous training with her Watcher and from intently studying the Slayer Handbook — a book that Giles felt was pointless to give to Buffy. Unlike Buffy, Kendra wielded her power exactly as her superiors instructed. Kendra believed that Buffy’s social life was problematic because the Handbook insisted on the importance of maintaining a “secret identity”. She also preferred to keep an even mind, believing that emotions were a weakness. However, after exposure to Buffy and her friends, this seemed to change, as she displayed anger when her favorite (and only) shirt was damaged.

Because of her upbringing, Kendra acted very shyly around men, not even being able to look Xander in the eye. She also had an initial distrust of all vampires, wanting to let Angel die even though he had a soul and had turned to the side of good.

As a Jamaican native, Kendra seemed to be unfamiliar with certain American terms Buffy used, such as “chick fight” and “wiggy”.

Kendra was endowed with all of the powers of a Slayer: superhuman strength, speed, agility, reflexes, senses, stamina, endurance, as well as prophetic dreams. In addition, she possessed an efficient and organized fighting style developed over years of training before her activation, allowing her to easily take out Angel, a 200 year old vampire, and match Buffy in a one-on-one fight, even though Buffy had been a Slayer longer than she had. Buffy recognized her skill though noted her lack of emotion and improvisation as a weakness.

Kendra also appeared very knowledgeable of demonology as she studied heavily in addition to her training. She knew about the Order of Taraka from reading the Writings of Dramius and was familiar with Angel’s reputation as Angelus. Kendra also claimed to be an expert on all types of weapons, though she misfired one of Buffy’s crossbows shortly after making this statement, claiming its trigger mechanism was different to what she knew.[2] 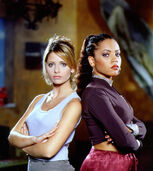 Retrieved from "https://buffy.fandom.com/wiki/Kendra_Young?oldid=201227"
Community content is available under CC-BY-SA unless otherwise noted.