After the Fall, Part Seven

“I am not a bitch! I'm just protected.”
―Kate Lockley[src]

“I guess I'm just trying to make a connection. The more I come to places like this the harder it gets.”
―Kate meets Angel in a nightclub.[src]

Kate was raised by her widower father, Trevor Lockley, who was also a police officer, who taught her to put her emotions aside and to take care of herself at all costs.

Kate first met Angel while both were investigating a case undercover involving the brutal murders of several patrons of D'Oblique, a popular singles bar. She initially believed that it was Angel himself who was behind the killings upon following him to and seeing him leave a crime scene, unaware that Angel had in fact been trying to stop the real killer (a Talamour searching for a permanent host). Angel escaped, and Kate became obsessed with finding him to the point where she broke into the Angel Investigations offices without a warrant to search for him. However, when she was attacked by the real killer and saved by Angel, Kate subsequently helped him to stop the killer (whom she believed to be D'Oblique's bartender) and dropped all charges against Angel, who offered her his services whenever she may need them.[1]

Kate's subsequent encounters with Angel led her to trust him as a helpful stranger, and she, in turn, assisted him, using her position on the police force to provide him with information about some of his cases concerning Melissa Burns[2] and Maude Pearson.[3] Kate recruited Angel as well to arrest the crime boss Tony Papazian. This last, helped by Wolfram & Hart, made arrangements for the police officers in the station to undergo mandatory sensitivity training due to Kate's alleged treatment of her prisoners. Due to the supernatural sensitivity caused by black ritual, Kate became softened, almost depressed at her father's depart and not vindictive with Tony and the others released criminals targeting her in revenge of his arrest and treatment at her hands until Angel's intervention.[4]

When she discovered that Angel was really a vampire, her black and white view of the world was shaken, and she delved into the darker side of Los Angeles. On one such investigation, Kate found her father's lifeless body, completely drained of blood, developing a hatred for Angel despite the fact that he couldn't have done anything to help. Indeed, Trevor had been working with a group of vampires as a courier and was killed by his associates because he wouldn't invite Angel in, although Angel was able to gain access once Trevor was dead and the invitation was no longer required.[5]

After her father's death, Kate struggled with her relationship with Angel; she undeniably had feelings for him, but blamed him in part for failing to keep his fellow vampires away from her father (despite knowing about Angel needing to be invited into a dwelling by the resident). She subsequently became increasingly adversarial toward him, taking her newfound hatred of all vampires out on him. Obsessed with ridding the city of "his kind", Kate was the first to investigate any calls matching the "otherworldly" profile, even if it was out of her jurisdiction. She developed an intense dislike for Wolfram & Hart and the clients the law firm represents, but at the same time showed an equal resentment toward Angel for exposing her to this world.

When Angel was prisoner for XXI, she refused to help Cordelia Chase and Wesley Wyndam-Pryce to find him.[6] Her issues with Angel came to a particular point when she attempted to accuse Angel of murder after Wolfram & Hart associate Darla framed him for the murder of "Stephen Kramer", expressly sending her a photo of the Hyperion Hotel, Darla manipulating her awareness of the existence of vampires. However, this attempt was quickly derailed when Angel's new associate Charles Gunn pointed out that Angel couldn't have entered the house unless he was either invited or the residents were dead, with Wesley showing her a portrait of Darla to confirm the true identity of her source

Her obsession with supernatural cases became her own undoing: after Kate and Angel worked together to take down a cop who had brought back deceased police officers as zombies in an attempt to cut down on crime,[7][7] she was eventually fired from the LAPD as part of their attempt to cover up what had happened. In the aftermath, Kate called Angel and blamed him for ruining her life, then attempted suicide by washing down prescription pills with hard liquor.[8] However, after he had his epiphany, Angel went to Kate's apartment, broke down her door, and held her under a cold shower, saving her life. When she came to, she thanked him for saving her life, then demanded that he get out.

That evening, Kate and Angel met up again and finally made peace, Kate expressing a belief that there was a higher power at work and they were not alone in the never-ending battle against the forces of darkness. When Angel asked her why, she replied that she never invited him into her apartment.[9]

After her departure from the LAPD, Kate established an antiquities business and used her business connections to learn more about the supernatural and the occult. She also stocked her hideout with an arsenal of weapons, from ancient to modern. During the fall of Los Angeles , she took action by going out into the streets and battling the demonic threat. She met and saved Connor from a group of demons, and took him back to her hideout. Kate reiterated to Connor the message Angel gave her — about doing what you can, no matter what — before leaving to blow up a demon army.

Following the end of magic, Gunn confirmed that Kate had returned to the LAPD.[10] 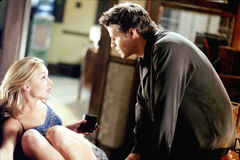 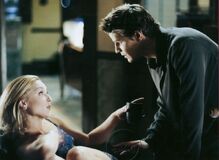