"Judgment" is the season premiere of the second season of Angel and the twenty-third episode in the series. Written by David Greenwalt and directed by Michael Lange, it originally broadcast on September 26, 2000 on The WB network.

I WILL SURVIVE — The well-oiled, demon-fighting machine of Angel, Cordelia and Wesley is back in full force and joined by the streetwise vampire hunter Charles Gunn. After a case of mistaken identity leads Angel to slay a demon protecting an innocent girl, karaoke is the only way to make things right. Meanwhile, Angel struggles with the discovery that he may not always be eternal and Darla recovers from her resurrection from Hell.[1]

Cordelia is in the middle of an acting class while Wesley is making money off people using his skill at darts. Both get a message on their beepers saying "911." The two meet up with Angel at a gym, and the three march through as one of the staff attempts to stop them while Angel and Wesley discuss the Carnyss demon that will be making a sacrifice there. The gym attendant stops when he notices Angel has no reflection in the wall mirror, which Angel "fixes" by kicking it, revealing the demon about to sacrifice two people. Making quick work of the demon and his human accomplices, the gang leaves claiming that the demon's appearance was due to steroids.

Later, the gang is back at Cordelia's apartment, which has been acting as temporary headquarters for Angel Investigations since their office was blown up. They have set up a big whiteboard with the details of their recent, current, and upcoming cases. As Wesley continues to guess what Wolfram & Hart raised months earlier and if they could have already faced it, Angel considers the idea that he could join a gym one day, until Cordelia notes that the men shower together. Suddenly Cordelia has a vision about a demon she doesn't recognize, and Wesley begins to research it based on her vague description.

At Wolfram & Hart, Lilah visits Lindsey, who is struggling with his new prosthetic hand while attempting to put on a CD for Darla, who has spent her time recovering since her resurrection. She senses Angel's presence in the city and remembers how he killed her. The three look forward to the prospect of messing with Angel's head.

Angel attempts to sketch the demon Cordelia saw in her vision, while Wesley contends with Dennis's attempts to help. Cordelia suddenly recognizes the demon in one of Wesley's books, and he identifies it as a Prio Motu, which is known for being a vicious killer. Although the team now know what they're dealing with, they have no idea where to find it. Wes says that he's been expanding their contact list and knows a parasite demon named Merl who should be able to help, but the place he likes to meet is unusual.

The gang arrives at a karaoke bar, and Wesley explains it is a sanctuary for demons. A lizard demon finishes singing, and the Host, a green demon with small red horns, goes to talk with him while Mordar the Bentback takes the stage. Finding Merl, the gang bribe him for information. After initially being unwilling, Merl agrees and tells Angel that the Prio Motu, which is a stone-cold killer, likes to travel underground, then he informs Angel of its probable location. The Host approaches and introduces himself to Angel, asking him if he fancies singing. Angel refuses, even after Wesley explains that the Host's powers allow him to see into the spirit of those who sing to him, enabling him to read their aura and answer questions about their destiny. Even though this could give them some much needed information, Angel still refuses. The Host notes that Angel seems to be feeling pretty prideful, and he warns that pride typically comes before a fall.

Investigating the area Merl sent him, Angel finds the Prio Motu near a pregnant woman. The two fight, and Angel snaps the demon's neck, killing it. Angel informs the woman, Jo, that she's safe, but she starts to cry and mourn the demon, telling Angel that he was her friend. Angel realizes his mistake, but Jo isn't interested in his explanation as she tells him that the Prio Motu was protecting her from "the Tribunal." She flees, and Angel stays behind.

Angel reports to Wes and Cordelia what happened, leading them to realize that Cordelia's vision was meant to send Angel to help the Prio Motu instead of killing it. Angel is upset that he killed a fellow soldier, another who had overcome his evil nature and was fighting for good like himself. He then decides that the Prio Motu's mission is now his. Wesley assures Angel that he had no way of knowing, but Angel realizes that someone did. Angel interrogates Merl, getting the demon to admit that he knew the Prio Motu wasn't deadly, but Mearl wanted him out of the picture because there's a bounty on Jo, or rather her unborn daughter, who is destined to become a powerful force for good. Now that her protector is dead, it's open season on them both. Angel learns the area where the Prio Motu was living, and he heads there hoping to find Jo.

In another part of town, Gunn saves a man from an attacking vampire. As the man runs off in fear, Angel arrives and asks Gunn for help with scouting the local area, and the two set out to find the Prio Motu's home. Angel explains what the Prio Motu was doing before admitting that he accidentally killed it. Finally finding the lair, Angel and Gunn scout the demon's home. Angel feels even more guilty as he surveys the demon's belonging and learns the Prio Motu's name was Kamal. He then finds a talisman and sends Gunn to deliver it to Cordelia and Wesley while he, as Gunn puts it, "soaks up the guilt."

Gunn leaves, and Jo arrives. She and Angel discuss what happened, with Jo still angry at Angel for killing her protector and only friend. She tells him that six months earlier she was just a regular woman, and now just wants to protect her daughter while the rest of the demon world wants to either worship or kill her. She explains that Kamal was meant to present the Coat of Arms to the Tribunal, and Angel realizes that this is the talisman they found. Jo is relived until Angel explains that he doesn't have the talisman on him. Jo angrily tries to leave, but a demon assassin attacks. After ensuring this demon is okay to kill, Angel takes care of it only for several more to appear. The two flee.

At Cordelia's apartment, she and Wesley continue their research on the tribunal when Gunn arrives with the talisman. This is the first time they've met him, and their attempts to appear cool in front of him backfire, and he is left unimpressed.

Fleeing from the demons pursuing them, Angel and Jo take refuge in an abandoned hotel. Jo realizes he personally knows the hotel. She tells Angel that the Tribunal is supposed to be able to offer protection for Jo and her daughter, and Kamal was meant to present the talisman and be her champion. Without either, Jo now intends to get out of town and make a run for it, as Angel tells her that she'll be found wherever she goes. The demons arrive, and Angel sends Jo to Cordelia's address and stays to fight.

Arriving back at the apartment himself after a tough battle, Angel is dismayed to learn that Jo never turned up. Frustrated that she doesn't trust him and has no reason to, he hits the whiteboard in anger. Cordelia tries talking to him, and he admits that, since learning that he was destined to become human one day, the fact that there was a light at the end of the tunnel had caused him to act like their battles were nearly over. Cordelia admits that they all allowed themselves to get cocky, but she assures him that, although it may be a long time before he becomes human, she'll be with him all the way.

Suddenly, Wesley finds that the talisman is meant to be presented before what is known as a Chair of Judgment, an ancient court that is meant to settle grievances with a battle to the death. Angel realizes that this is why Kamal was with Jo, as Wes tells him the tribunal could be anywhere. Angel knows he needs to find Jo quickly, but he can think of only one way to get the information.

Angel is on stage at the karaoke bar, mangling the song "Mandy" before an unenthusiastic crowd. The Host interrupts him and takes Angel aside for a chat. The Host assures him he shouldn't feel as much guilt as he does for killing Kamal, telling him most people would have done the same. Before giving any further information, the Host asks Angel why he picked "Mandy," and Angel admits that he thinks it's "pretty." The Host gives him credit for confessing and tells Angel the information he needs. Jo can't escape the Tribunal, they'll appear wherever she is and without a champion or the talisman things are grim for her and the baby. He tells Angel where Jo and the Tribunal will be, but can't say if he'll manage to save her, simply that he has to try.

Attempting to flee, Jo is suddenly faced with the Tribunal when it appears in the street along with a demon knight on horseback. Without her champion or the talisman, the Tribunal denies Jo's request for asylum, and they allow the demon knight to kill her. Angel suddenly throws down Jo's talisman and declares himself her champion. The fight to the death begins with a joust on horseback. Angel assures Jo he grew up around horses, and the joust starts. After a couple of passes, Angel is knocked off his horse, and he engages in a swordfight with the demon knight, which appears to end with Angel getting a sword in the gut. The Tribunal announces that the demon knight may do what he wants with Jo, and the knight proceeds to pull a knife to her neck. Angel suddenly rises and beheads him with a single sweep. With Angel having won, the Tribunal places Jo and her child under their protection until the unborn girl comes of age.

With his mission over, Angel removes the whiteboard with all their missions, telling Wesley and Cordelia he realized that fighting the good fight doesn't include keeping count of his victories. He then leaves and visits Faith in prison, and the two discuss the hardships of redemption, if they be serving hard time or singing Barry Manilow in a karaoke bar. 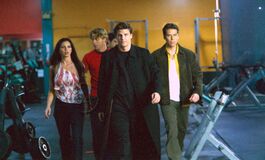 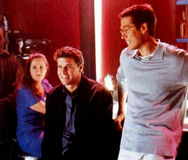 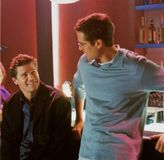 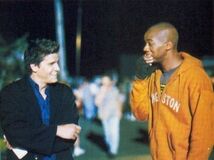