Buffy the Vampire Slayer (film) (non-canon)
"Welcome to the Hellmouth"

“You get the hell away from my daughter!”
―Joyce Summers, protecting Buffy from Spike[src]

Joyce Summers was an art gallery manager and mother to Buffy and Dawn Summers.

Joyce was born in 1958[3] and had two sisters, Darlene (who would later live in Illinois along with her own unspecified family) and Lolly (who made the curtains hanging in their Sunnydale house). Her niece, Celia, whom Buffy was very close to, died at a young age.[4]

In high school, Joyce had a Gidget haircut and was on the yearbook staff. Joyce met Hank Summers at the prom during her freshman year of college. Joyce did not have a date, but Hank did.[5] The two married and had one daughter, Buffy Summers, who would become the Slayer.

In Los Angeles, Hank and Joyce's relationship eventually deteriorated. Their arguments included those about Buffy when she came home after her first slay.[6]

Hank and Joyce placed Buffy in an asylum after she was expelled for burning down the Hemery High School gym. Neither Hank or Joyce believed that Buffy was a vampire Slayer.[7]

“When did you die? You never told me you died?”
―Joyce discovering that Buffy had died[src]

In Sunnydale, Joyce managed an art gallery and maintained a close relationship with Buffy, although she was disappointed by some of Buffy's behavior. Joyce was a protective and loving parent. She also became a maternal presence in the lives of Buffy's friends, Willow Rosenberg and Xander Harris.

When vampires attacked Sunnydale High School on Parent-Teacher Night, Joyce protected her daughter by attacking Spike with an axe after others fled the school. She was concerned about Buffy's poor academic performance, but she was proud to discover that Buffy was a strong leader who took care of herself.[8]

Joyce was disturbed when Angel turned into a stalker after losing his soul and returning to Angelus. She was even more upset when she learned that Buffy had lost her virginity to him. Joyce became increasingly frustrated with the distance between herself and her daughter. When police officers visited the house and informed her that Buffy was a murder suspect, Joyce feared the worst. She met Buffy, who was accompanied by Spike, outside their house. Buffy initially tried to convince her mom that she and Spike were in a band, but when the three were attacked by a vampire, Buffy staked him in front of her mom before leaving to save the world. Joyce reacted badly to this revelation and demanded that Buffy take the time to explain herself, going so far as to warn her not to come back to the house if she left. Taking her at her word, Buffy departed Sunnydale for Los Angeles.[6]

While Buffy was gone, Joyce worked with Rupert Giles and the Scooby Gang to locate her. She developed a close friendship with Pat, a woman from her book club who was later killed by zombies. Joyce was relieved when Buffy returned and wanted things to go back to normal.[9] She tried to support Buffy's extracurricular activities while also encouraging her to think about her future. After accompanying Buffy on patrol, Joyce fell under a demon's spell, which drove her to lead Sunnydale on a witch hunt. She and others attempted to burn Buffy, Willow, and Amy Madison at the stake, and was later horrified at her actions.[10]

Spike stopped by the Summers' home when he returned to Sunnydale where Joyce lent a sympathetic ear as he related the details of his recent break-up, which earned his perpetual gratitude.[11]

Buffy had been Joyce's only child. However, the Key, a mystical source of energy, was transformed into her new daughter, Dawn, in order for Buffy, who shared her blood, to protect her. The spell used to transform Dawn and keep her safe rewrote everyone's memories.

Later on, Joyce's health deteriorated and she was diagnosed with a brain tumor. Pressure from the tumor interfered with her mind and she temporarily lost mental clarity. At that time, Joyce recognized Dawn's anomalous nature and confirmed with Buffy that Dawn was not her daughter by birth. Despite that, she loved and accepted Dawn as a member of the family and urged Buffy to do everything in her power to protect Dawn.

Joyce's health improved after a successful surgery, although her life was soon in danger again. Glorificus, a hell-goddess, sought a mystical key that could open inter-dimensional portals. Although Glory did not realize that the key was, in fact, Dawn, she knew that Buffy protected it. She threatened Buffy's family, which forced Joyce and Dawn to temporarily stay with Spike for protection. She continued her friendly relationship with Spike and they watched the soap opera Passions together. Soon afterward, Joyce suddenly died from a brain aneurysm.[12]

Dawn, devastated by Joyce's death to the point of irrationality and feeling abandoned by Buffy, who was picking up greater responsibilities and trying to avoid emotional breakdown, resorted to necromancy, despite Willow and Tara Maclay's warnings. With help from Spike and Doc, she reanimated Joyce. However, Dawn realized the inherent dangers of what she has done and that her mother may return as a zombie, and broke the spell before Joyce could enter the house.[13]

After her own resurrection, Buffy was poisoned by a demon, which caused her to have visions where she was incarcerated in a Los Angeles mental institution, and nearly became convinced she wasn't a Slayer. Joyce appeared, still married to Hank, and attempted to convince her daughter to get over her apparent insanity. However, her message of strength ultimately led Buffy to fight against the poison and return to her save her friends in Sunnydale.[7]

The First Evil also took her form to contact Dawn and tried to drive a wedge between the Summers sisters.[14]

Years later, when cornered by the Scoobies, D'Hoffryn offered to grant them all one wish if they let him go; in Buffy and Dawn's case, he offered to resurrect Joyce and make her healthy again. While they were tempted, they ultimately refused, knowing there would always be a catch.[15]

In the quiet year between the Supernatural Crisis Act and the Reckoning, Xander and Dawn gave birth to a baby named after her[16].

Joyce was a stereotypical Californian mother, distant and reliant on "pop-psychology" techniques in raising her daughter, but well-meaning. She became more of a central figure, however, as she became more competent and sympathetic, as exemplified when she attacked Spike with an axe in order to protect her daughter. She was a warm, loving mother with a deep reserve of inner strength and a highly cynical and sarcastic streak, clearly inherited by her daughters. In stark contrast to Willow's religious, absent-minded parents and Xander's angry, bitter parents, Joyce was a constant maternal presence, acting as a mother and friend to all the gang.

Joyce often bantered with Buffy and even held her own with Faith when the rogue Slayer held her hostage, sneering "Are you planning on slitting my throat any time soon?" in the middle of Faith's monologue.[17] She was a fan of the soap opera Passions (which she watched with Spike), the movie Thelma and Louise, and art (particularly African art). She was also a competent seamstress. Her favorite tipples were Schnapps and Kahlua and she was a fan of actor Burt Reynolds, the singer Juice Newton and the band 'Seals and Croft'. She likes waffles and may ski judging by the poles Oz found in her closet. She is a member of a book club and learned to cook Mexican food.[9]

She hated potlucks, which she gave as a reason for not wanting a wake, and Jell-O, which, she confessed while in the hospital, "creeps her out". She often cared more about others than herself, being more concerned about Riley Finn than her medical condition. She had a friendly and motherly relationship with Spike, who claimed she was the only one he could stand. Spike paid his respects by anonymously leaving flowers.

When Joyce reverted to her teenager years under the effects of the band candy (made by Ethan Rayne), she demonstrated an attraction toward mysterious bad boys like Ripper, a trait that was also apparent in her daughters.[18] 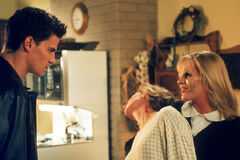 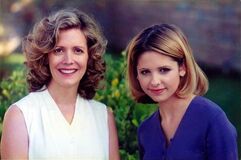 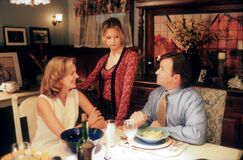 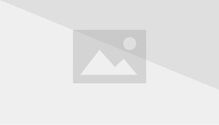 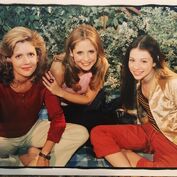 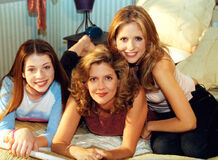 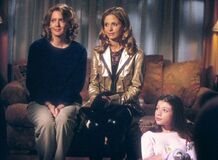 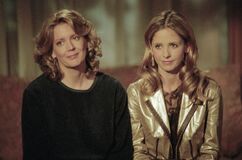 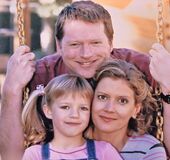 Retrieved from "https://buffy.fandom.com/wiki/Joyce_Summers?oldid=203764"
Community content is available under CC-BY-SA unless otherwise noted.